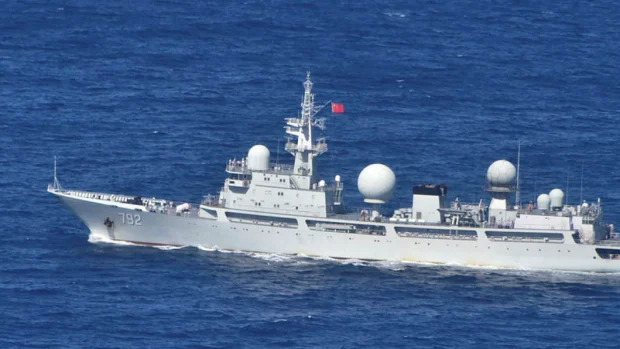 One could be forgiven for thinking that China has more vested in the upcoming federal election than we do. After all, we’re getting nothing out of it. All we can look forward to is more of the same. So what if Albanese wins, or if Morrison is elected for a second term? The system never changes, and only when it does will any substantial change occur. Only then will we be able to address regional “challenges” such as China. But China is hoping for a Labor victory. They may get it if what the polls are indicating is true. Home Affairs Minister Karen Andrews said that China’s security pact with the Solomon Islands is a form of “foreign interference.” Given that the whole of Australia is founded on foreign interference, what does it matter to us? All we get is a new caretaker for a foreign system of government anyway.

The detection of a Chinese spy ship off the coast of West Australia this week is well-timed. Yes, it’s opportune to show off how ill-prepared and impotent the Morrison Liberal government is. Meanwhile, Beijing is instructing the large Chinese diaspora in Australia on how to vote. And so what? For so long, elections have been determined by which party the US prefers. However, America’s been lucky since it has had bipartisan representation here from either party forever. The coalition is on the wrong side of history. As America crumbles like the last days of the Roman Empire, they’re still banging on about democracy. If Australia had ever pursued a policy of armed neutrality, China wouldn’t be such a nuisance. For one thing, protectionist policies would’ve kept China from buying up our land and resources. The White Australia Policy would’ve kept the Chinese people out of Australia.

The US Burns While China Watches

The conservatives still believe in the US-led world order. And this is while the current regime in America presides over the most disastrous period in America’s history. The neo-cons around Bush may have paved the way for the acceleration of end-times, but the democrats are nailing the coffin lid shut. They have befouled every conscious sentiment that the conservatives hold dear. The US economy has tanked like the Titanic. Domestically, the US is on the verge of a civil war. The far-left has a license to destroy society. While Biden focused on conservatives trespassing in the Capitol Building, they shrug and smile as pro-death abortionists hold siege to the homes of Supreme Court judges. That is directly in defiance of American law, but what law? The law is only what is enforced, as nationalists have learned in Australia.

Looters in California are free to raid retail outlets at will. Leftist bias in the legal justice system is seeing hardened criminals released onto the streets as soon as they’re arrested. The trans movement has become a national psychosis. Consider it a form of contraception, which pro-abortionists and the like embrace. The same ones arguing for women’s abortion rights are fighting to cancel women’s rights. One can only look at where this is going. Quite simply, it will all lead to a vanishing population. And it’s not just white genocide either. Consider that 60% of abortion clinics are in coloured neighbourhoods. Queers are openly bragging on TikTok about grooming children in schools. They want us to believe that men give birth. Government policy stokes anti-white hatred. And now, food shortages. Asked about provisioning, Biden made a sarcastic comment. He said the government isn’t a mind reader.

China Watches As The US Starves Its People

As American democrats attempt to shovel $40 billion into their proxy war in Ukraine, American shelves are running out of food. It’s not by accident either. It’s not the fault of COVID or Russian President Vladimir Putin. Food processing plants are being deliberately destroyed; farmers are being forced to ruin their crops. Yet, Australia is tied to this sinking statue of liberty. How can conservatives anywhere, but particularly in Australia, wish to continue this braindead alliance? The Chinese spy ships are not here to spy on Australia but America. Australia is America’s vassal in Asia. More than any other country in the region, we are their satellite. Our intelligence comes from them; our raison d’être is as a US station in Asia. We exist to mind their trade interests. Just as in America, multiculturalism is coming home to roost in Australia. The American virus is ruining us.

No Party Solution Especially On China

The government has changed the registration rules for minor parties. There is no electoral solution to this problem, but if Australia First had its federal registration there might. Australia First is the only party that advocates for armed neutrality and total Australian nationalism. In Penrith, last year, AFP candidate Lili Orrock won the council election. A council rort cheated her of the victory. They miscounted votes. The winning candidate has a demonstratable conflict of interest. Voters at pro-AFP booths were turned away. AF might not be able to change ‘the system’, but it can sure throw a spanner in its wheels. But now it must regroup and battle conservatives, Hansonites, conspiracy nuts and neo-Nazis for acceptance by the dissident right. This was one of the only parties worth voting for. So, we are left to choose which executioner we prefer.

The Decline Of The West

The west is dying. It is not the end of European civilisation, but of the liberal elites’ western-corporate-Zionist west. It is now at the final stage of decline: authoritarianism. The West lies so often that it has started believing its own fiction. And it punishes those who dare question the lies. They lie to silence the truth about the system’s impending collapse. Thus, China, with its tongue in its cheek, whittles Australia’s stick. By doing so, it is, in truth, agitating the US. Beijing bargains with the corrupt Manasseh Sogavare in the strategically vital Solomon Islands to threaten the maritime supply route. It sends spy ships off Australia’s coast just to sit back and watch how our powerless government reacts. China knows that the west’s time is up. Any further interference in Ukraine will only accelerate its end. And frankly, good riddance.

A memorandum of understanding signed between the Papua New Guinea government and the Fujian Zhonghong Fishery company is a great...

A Chinese developer that bought a 99-year lease on an idyllic island on the Great Barrier Reef has slapped a...

China has upped the ante in its global-sized dummy spit against Australia by taking to Twitter with a meme that...

The Global Times has attacked Australia over the Morrison government’s inability to allow our foreign policy to be dictated by...

Oddities abound in non-mainstream political movements; singular happenings that would lend plots aplenty to satirical novels and screenplays. One such...