HOW DID WE MISS THE WARNING IN DYSTOPIAN BOOKS AND FILMS? 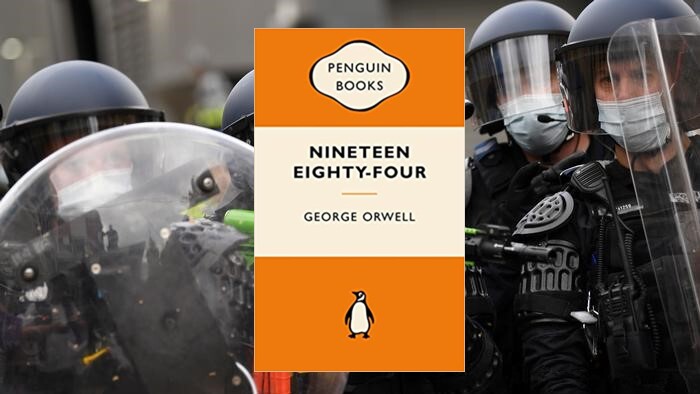 Looking about today, at this age of consensual authoritarianism, one comes to wonder how we got here. After all, it is not as though there was no warning.

It is not as if George Orwell did not write 1984, or Aldous Huxley’s Brave New World was never published. And what about Fahrenheit 451, Ray Bradbury’s contribution to a vision of an America in which books get burned by law to prevent knowledge from spreading. Every dystopian film and novel chillingly echoes what we have ignored by arriving at the COVID health state. We pray it stops before we reach Soylent Green.

How is it that this could be? When Game of Thrones, as perverted as it was, portrayed tyrants. Were they not booed? The woke twerps that watched GOT are now cheering on the suppression of freedoms undercover of a hyped-up ‘pandemic’ [sic].

In 1984, the caveats flowed thick-and-fast. We read about the anti-sex league and the plan to end the family unit. Enemies of the party became un-persons. The nature of the party system ensured everyone was found guilty of a thought crime at the end. Orwell summed up his vision of the future, “If you want a picture of the future, imagine a boot stamping on a human face – forever!”

Likewise, Orwell’s Animal Farm used a children’s fable to explain the nature of how totalitarianism grows.

All of it came as a dire warning: cancel culture, the war against the nuclear family, the suppression of knowledge, ideas and history; a brutal central government that faked constant wartime as a means of perpetuating its control over the party members and proletariat; all of these are analogous to the disturbing period of history we are in now.

Anthony Burgess foresaw the quasi-socialist state in A Clockwork Orange, a novella teeming with social predictions that turned out to be more-or-less accurate. In 1967, Dial Press released Report from Iron Mountain. The book has no narrative perse but purports to be a report by a secretive government panel that concludes that war, or an approximate disaster, is a vehicle necessary for a government to maintain power.

Many speculative works are an allegory, but RFIM grabs the meat of the matter by its nuts. Written during the Johnson administration, it was a commentary of the moral actions of the US government during the Vietnam War. But it also perspicaciously revealed the theorizing at dispassionate thinktanks such as the Rand Corporation.

Documentary filmmaker Adam Curtis has explored the manipulation of external threats in the consolidation of governmental powers. He has guided us through the evolution of modern political systems to the age of individualism and the politics of fear. Despite all of this information, the highest educated are throwing themselves at [what we call] the Health State: a police state organised around protecting society from contagions.

The disingenuous response by governments to the pandemic should be apparent to anyone raised on such challenging Platonic fare. The absence of any conviction in politicians must be perceived by those who spend time considering political matters. If it were so, the system would not be staggering towards a dire outcome for us all.

Politics in Australia is a power play, plain and simple. It is about electing parties, two of them. The political weather vane determines policy, not what is best for the country or what the citizens desire.

The shift in the political ballast feeds self-interest among the political class and fuels harmful policies. Duplicitous careerists fill the void left by the absence of principled and tenacious politicians. As such, the irresistible globalist forces suborn them.

None of the political elite has stood up against the harmful policies presently corroding Europe and America, such as unfettered immigration, Cancel culture, wokedom and the authoritarianism it has borne. We have swallowed the fear surrounding COVID so gullibly that now outright despots like Victorian Premier Daniel Andrews are feverishly grabbing for absolute power, despite having displayed all the negative characteristics of a tyrant.

Aged left-wing hero Noam Chomsky is lately resembling Gandalf from The Hobbit. He told an interviewer that the unvaccinated should be removed from society and starved to death.

New Zealand Prime Minister Jacinda Ardern gave a toothy smile and said yes when asked by a reporter if New Zealand would divide into a country with two classes, the vaccinated and unvaccinated. The centralised media is aiding and abetting the drive for authoritarianism via loaded terminology and a flagrant slant towards restrictive government policy.

Meanwhile, every other dickhead is watching the Squid Games on Netflix. Tomorrow, they will be playing them. ■

JERUSALEM ON THE WILLAMETTE — THE PORTLAND PARTY IS OVER

REVENGE OF THE LONG-TERM UNEMPLOYED

One thought on “HOW DID WE MISS THE WARNING IN DYSTOPIAN BOOKS AND FILMS?”