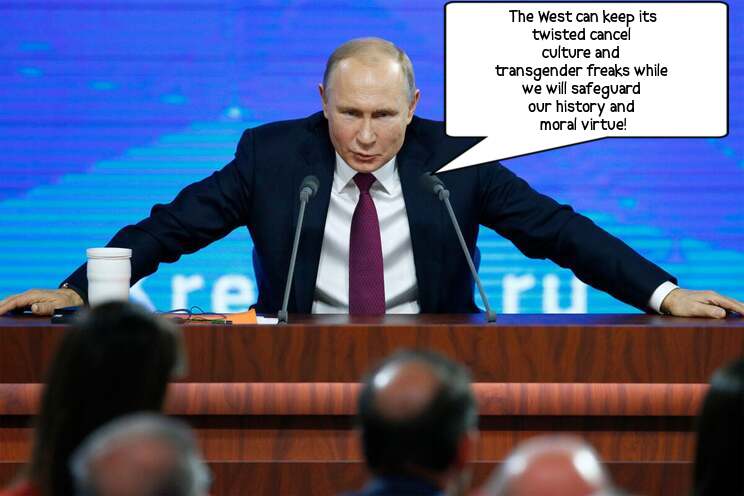 Heroic Russian President Vladimir Putin has condemned the West for its toxic cancel culture and descent into the moral abyss of gay pride and transgender rights.

Addressing the annual Valdai Discussion Club in Sochi, a resort in the Black Sea, Putin cited the need for Russia to preserve its “spiritual values and historical traditions.”

He said that a healthy nation must avoid the “sociocultural disturbances” of the West in preserving its independence and integrity.

Putin argued that Westerners believe “the aggressive deletion of whole pages of their own history, reverse discrimination against the majority in the interests of minorities … constitute movement toward public renewal.”

“It is their right, but we are asking them to steer clear of our home. We have a different viewpoint,” he said.

The Russian leader took aim at the perversity of the gay and trans rights agenda. “A boy can become a girl and vice versa” and judged this as ‘monstrous’ and “on the verge of a crime against humanity,” he said.

His refreshing review of Western decline also noted how in pushing the transgender cult, the nuclear family is as reviled as the Christian faith: natural enemies of the nihilistic doctrine of wokedom.

Putin’s remarks attracted the expected defensiveness of Western columnists still promoting the lie that Russia interfered in the 2016 US Presidential election, which resulted in the nomination of Donald Trump. Attacking his traditional masculinity as an image ulterior to Western values [sic] the Zionist propagandists portrayed his comments as repressive. This is from a centralised corporate media that represses any dissent.

Australian Nationalists seek recognition from the Russian State in our goal for independence and armed neutrality. Sadly, at present, our forays with the Australian Cossacks led to a defeatist road that remains blocked while Simeon Boikov is their leader.

Boikov, who aims to spread understanding of his homeland, shunned nationalists in pursuit of support from multiculturalists and other international parasites. Admittedly, this stems from his lack of coherence on the subject of Australian identity, an area in which he refused nationalist counsel.

Instead, Boikov has embarked on a buffoonish and ill-defined social media crusade using the typical strategy of far-right impresarios. The fact that Dr Jim Saleam of Australia First gifted him the very Eureka Standard that he abuses with his associations and misguided rhetoric is disappointing.

Still, while Boikov became consumed by the very thing that we struggle against, creating alliances with those whose agenda brings about mass immigration which is the cornerstone of Wokeness, at least Putin is resolute. Boikov should understand his leader better to comprehend the Australian struggle and how he failed to support it. ■

JOE BIDEN – MAN ON THE MOON