CONFRONTING THE MYTHS OF THE NAZI CAUSE OF WHITENESS 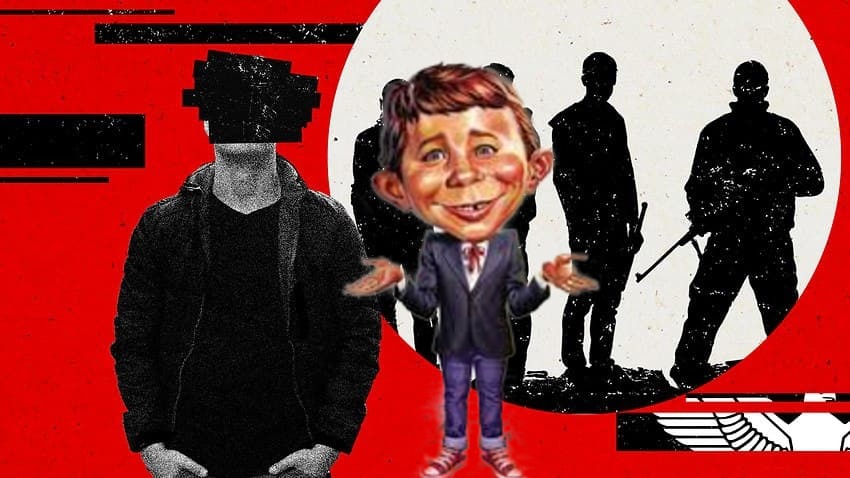 Leftist SBS jotter Henry Zwartz took a break from his bread and butter writing on Northern Territory related scuttlebutt to favour us with another of his weird Neo-Nazi conspiracies.

This time Hank wants to outdo Nine with an intriguing tale of a network of fascist men’s clubs supposedly operating out of nondescript industrial estates somewhere in your metropolitan area.

If this story sounds familiar, then Mr Zwartz is at pains to point out that this unnamed group has never been exposed by the media before today. He scarcely reports anything, the article is so vague that it eschews any real information in favour of the testimony of racism experts and community leaders.

Beginning with a sketchy account of what the group is up to from a concerned insider named Mark, the proceeding tall tale is light on details. Mark’s story of gym-junkie would-be terrorists playing war games out in the scrub at the weekends, nattering about Hitler and guns and saying rude things about people of colour.

There is also the usual reference to links between these antipodean ne’er-do-wells and shadowy overseas groups, some of which have been proscribed by law — as if this was evidence of anything other than a widespread honey trap for lonely losers, the mentally ill or rootless lumpenproletariat types.

I describe the men caught up in these Nazi cults in such terms because it is invariably the sad cases of our society who end up being hurt when their loyalty to the group to which they turned out of loneliness, or were suckered into joining, ends up costing them their jobs, families and reputation.

If this new group exists, which I find doubtful, then it is keeping a very low profile, so low that they have escaped the notice of Australian Nationalists, who are the real experts on such phenomena, as opposed to the self-serving ethnic grifters, nitwits and Communists routinely quoted by the media.

Then again, maybe this is a re-branded version of the most recent crop of Hollywood Nazi cells and Mr Zwartz is being cute when he claims to have exclusive access to a mole in their ranks, the only way we could say for sure would be if we had some actual information on who is running these clubs.

There exists in this country a small pool of “usual suspects” who perpetuate the Neo-Nazi nonsense in Australia, they are criminals and misfits for the most part, but it is a fact that they always report to the state counter-terrorism units, the Australian Federal Police and ASIO.

If any one of these stooges were to be revealed as facilitators of a group such as the one touted by SBS then we would immediately know what we were looking at, a state-backed setup serving the objectives of the political police.

Neo-Nazism is such an ahistorical and contradictory idea that, as a state intelligence construct, it cannot exist outside strict parameters and an aesthetic laid down over decades of these types of operations, both here and abroad.

There is a well-established pattern in the formation, expansion and inevitable dissolution of Nazi cells, it rarely varies because the principals and their handlers must escape unscathed to begin a new round of provocations in the future when it becomes politically necessary.

There is much discussion in the article of the potential for a Christchurch style massacre by members of Neo-Nazi cells however, Brenton Tarrant was an anomaly in that he succeeded in carrying out his attack, which means he was almost certainly not operating under any sort of state oversight.

The political police want terrorist conspiracies, show trials and convictions, not actual attacks; they want the people caught in their honey traps to go right up to the brink of committing an outrage so that they can be scooped up and paraded before the media and politicians to boost the political stocks of the security agencies.

The media play their part by doing the dirty work of entrapment, something which police officers are prohibited from doing, but which companies, such as Nine Entertainment, with their deep pockets, can easily pull off.

In the recent case of the National Socialist Network, it is alleged that Nine Media put an informer into the group and supported him for months, even pouring thousands of dollars into the club in the form of food and alcohol for their get-togethers.

Only when Nine had their footage and the police had charged Tom Sewell with several offences was the detailed story of the group broken on television and in print. Presumably, SBS do not have the budget and the state support to be able to do a proper job on this new group, to name the names and get the clandestine footage, so they have to come up with this amorphous far-right threat to appear as they are part of the anti-fascist game.

It is hard to believe that any new group, let alone a genuine Neo-Nazi outfit with no links to known provocateurs has emerged without broader knowledge of its existence: we knew all about and reported on the National Socialist Network and its precursor gangs from day one, so I would go on the record as asking Henry Zwartz to either put up or shut up.

SBS should name the group and attempt to identify the leaders if it is honestly interested in exposing a latent Fascist menace worse than the Andrews Government. If their information is accurate there would be no danger of a defamation suit. Then let us, the experts on far-right provocation, make the call on whether this shadowy crew are fair dinkum or not.