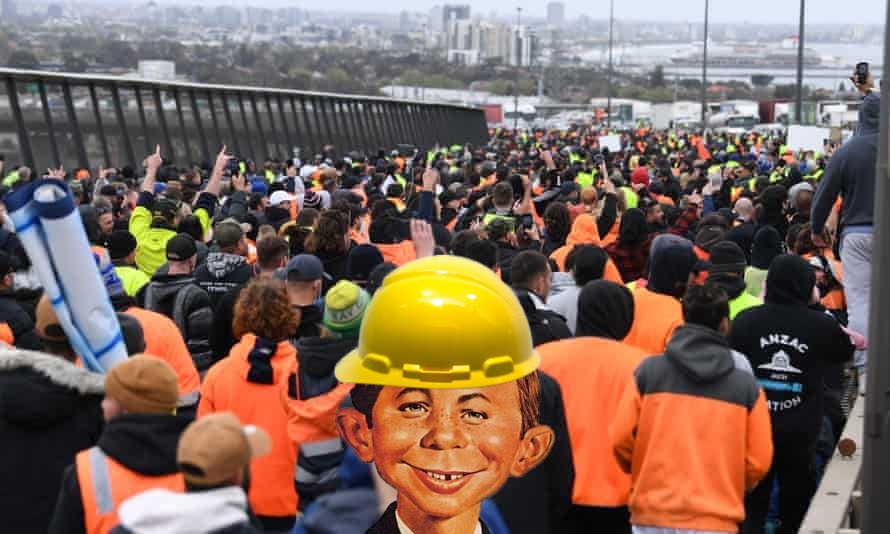 Ed: The attitude at NAB is that all protest against the tyrants is good no matter where it comes from. We do not have to agree with those doing the fighting on any other subject. Nevertheless, to show that we’re fair-minded about differing nationalist perspectives, we present the following. Bear in mind, members of the CFMMEU have historically attacked nationalists. Having said, this is the last article we will ever let this treasonous bastard write:

After three days of aimless protests by building workers in Melbourne I have noticed a few people becoming very excited at the prospect of a “workers revolt”.

Let us be real for a second, the sight of hi-vis clad union toughs lumbering about the city and scuffling with police may strike some as romantic, however, as someone who has had to deal with their ilk for over 30 years, I can say that the revolutionary potential of this mob is pretty close to zero.

The CFMMEU, for all their bluster, represent only a tiny fraction of the construction workforce, in reality, most tradesmen cannot stand the organizers and regard the members as a bunch of lazy, entitled boneheads. Their on-paper ranks are artificially inflated by retired and inactive ticket holders who retain membership but are exempt from paying their dues.

Speaking frankly, working on union sites as an independent contractor is a horrible experience, you have the organizers and shop stewards harassing you to sign up and the members doing everything they can to impede you and make you feel as unwelcome as possible.

The type of character found on a union job is illustrated by the fact that if you were to leave your tools unattended to go to the toilet someone would steal them, that is if they would let you use the toilet at all, another intimidation tactic is to deny access to common areas.

I once worked on a job in Flinders Lane in Melbourne CBD, a conversion of a 19th-century building into an apartment complex where the lower floors had been released to the owners but the top floor was still under union control.

We had a fairly straightforward job of fitting out one of the flats which quickly became a nightmare due to the CFMEU morons from downstairs who refused to even open the main gate to the carpark. This impasse being solved by my then boss who ended up ramming his vehicle straight through the gate leaving it a mangled wreck and the unionists apoplectic with rage.

From that point on we were barred from the site bathrooms, the exterior scaffold and the service lifts, we had to try to manage with the little passenger lift from the foyer and have the owner install a temporary WC so we could work.

My impression of unionists over the years is that they are still the same dumb, servile drones that they have always been, they are petty, vindictive and narrow-minded almost to a man.

I have a ton of such stories, I entered the workforce in 1987 and every single interaction I have had with the CFMEU or its predecessor the BWIU has been negative, they treated me like crap even when I was a member for two years, repeatedly closing down jobs on the stupidest pretext and bullying everyone who made a move without their approval.

That’s the big issue here, most of the people who are union members are bullied into joining in the first place, the whole outfit is so rotten and riddled with serious criminality that the only “true believers” are bikies and continental mafioso types because the organization probably faithfully reflects their goals and interests.

Bill Shorten got it right when he called the protestors a bunch of entitled man-babies, the issue of the vaccine is neither here nor there, there is so much work available at the moment that if a worker doesn’t want the jab, he can simply walk out of his job on a union site and into another job with a less fussy employer who won’t bother with enforcing the mandate.

That is the thing with construction, just because an edict comes down from the government doesn’t mean it will be followed, the whole industry is based on the absolute minimum of compliance with the rules, everyone has some sort of fiddle going on. While the CFMEU twits are out pointlessly butting heads with the Jacks the independents are figuring out ways to keep working and making money while not making it too obvious that we are bending the rules.

That’s a big difference, we are forced to think for ourselves all the time, the unionist has all his thinking done for him.

Tea rooms are also a luxury, most of us are lucky to get an upturned bucket to sit on during breaks, usually in a freezing/ boiling, windowless structure or outside on the street, if you want to eat in relative comfort the only place to sit is in your vehicle.

When the two-week ban on construction is up and the sites re-open all the rowdies currently bouncing about town like Baboons will slink back to work, pay their union dues and all will be forgiven.

Anyone who did try to shake things up by trying to form a rival union or otherwise seeking to radicalize his co-workers would be quickly singled out and made to yield to the smelly motorcycle boot of union organizers stamping on his throat.

There is no revolutionary potential in the unionist of 2021, he is not a half-starved shearer, or a docker physically broken by years of humping wool bales and wheat bags; today the building union member is paid up because it’s not worth the hassle of resisting the goons at the gate to the site, the ones with the menacing gaze and portable EFTPOS machine.

Nor does he know much about politics or the workers’ movement of old, he is an overpaid, underworked clod and as much as I despise the term “sheeple” …well, if the shoe fits.