MATILDAS TAKE A KNEE AND POSE WITH ABO FLAG AT TOKYO 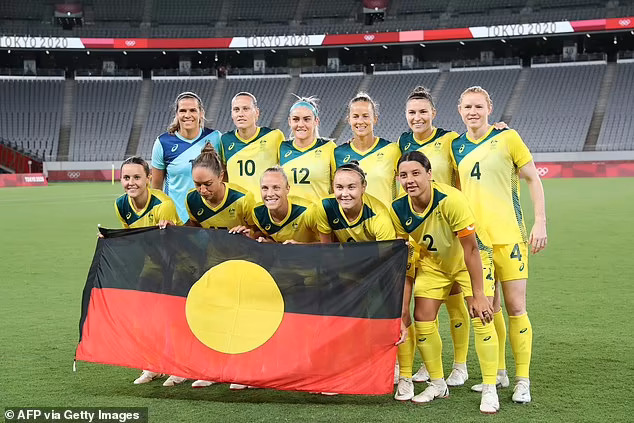 Women have taken over Sport. Perhaps suffrage was a big mistake after all, but when the two combine — women’s sport and politics — you get inane acts of treason such as that perpetrated by the rough-headed butcher’s blocks from the Matildas.

No self-respecting Aussie male outside of the players’ fathers and brothers has ever watched these diesels. It’s unmasculine to support women’s sport except for copping a perv at the tennis or volleyball. When women move into men’s sports they’re not only upsetting the natural order of things they devalue the game they’re playing.

But to do what the Matildas did – come out before a big match and pose with the Abo flag at the Tokyo Olympics — a national insult and betrayal is committed. What’s more, it’s disingenuous.

It’s insulting to Aborigines since there isn’t a single Abo in their team or one that looks it anyway. It’s a meaningless act that only supports the Prime Minister’s treasonable plan to include an “Aboriginal voice” in the constitution. Nobody wants that, it’s not right on any level.

None of these ‘girls’ looks to have the intellectual wherewithal to even debate the merits of their actions. They no doubt decided this stunt during a lockerroom pampering session. But, not only did they commit this outrage, into the bargain they dropped the knee. Yes, they took a knee in the name of dead black career felon George Floyd.

The move caused outrage among ‘fans’, who should be embarrassed to call themselves fans, but we digress.

Matildas captain Sam Kerr essentially told supporters to go and have non-binary sex with themselves and said the ‘gesture’ occurred upon consultation with indigenous members of the squad. This means White girls identifying as Aborigines, Bruce Pascoe-style.

Basil Fawlty, who’s now being cancelled, said “Women, they’ve got one brain between the bunch of them.” But we think he was being overly generous.

Now, we only take umbrage because these bushpigs were representing Australia, although, today, that doesn’t count for a lot. Yet, the very idea of Australians playing soccer, be they male or female, is distressing, since it’s been a rule of Australianness that only wogs play soccer.