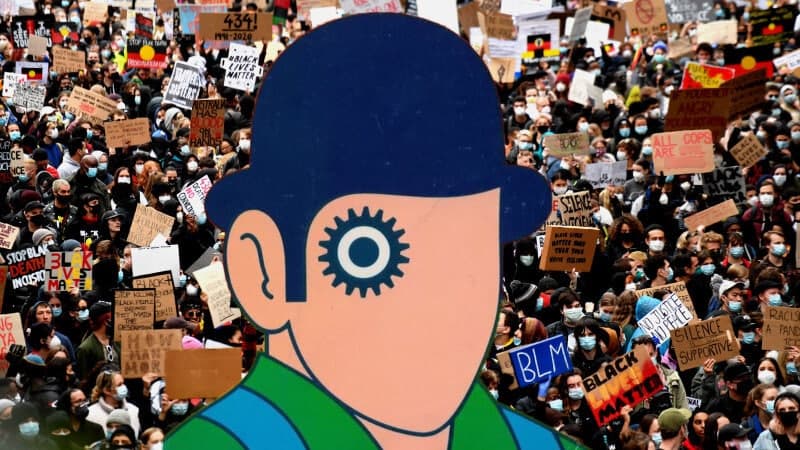 American intellectual James Lindsay has interested me in his quest to describe and eventually nullify the latest social contagion, “Wokeness”.

Lindsay holds a doctorate in mathematics, so he brings a sharp, scientific brain to the struggle against modern cults and Woke totalitarianism. Key to his understanding are the concepts of meaning and authenticity, he calls them the Kryptonite to wokeness and the stasis of postmodernism which has fallen upon the English-speaking world.

Wokeness grew out of postmodernism, the schools of thought infected by crackpot French philosophers such as Michel Foucault, Jean Baudrillard and Jacques Derrida created this deeply cynical mindset and spawned the weird social movements today.

If Woke cultists appear unmoored from reality to the layperson it is because they are in a constant struggle between the real and unreal worlds, the life lived in authentic experiences and filled with meaning and purpose versus the artificial world of theories, simulated experiences and contrived personal identities.

The devices of Wokeness are constantly in friction with the real world, the term “mugged by reality” is an apt way to describe the scenarios in which the Woke find often themselves, the authentic world has a way of punching your lights out if you try to impose the fantasies of postmodernism upon it. An example plucked from the headlines might be the Black Lives Matter movement, which is a highly suspect operation with alleged links to Chinese political operatives, nevertheless, it is current and immediately comprehensible to most people.

BLM, at its core, is a Black Power movement that harks back to the days of the 1960s Black Panther Party and their fellow travellers, the movement doesn’t genuinely want to abolish the police, they want to diminish and demoralize the current law enforcement bodies so that further down the track BLM can more easily take control of them through legitimate political means.

In the United States, some police departments which have come under the direction of BLM affiliated politicians are having their funding increased and are on recruiting drives; we all know how much “progressive” governments love their police and intelligence agencies. The more interesting aspect of the authentic Black Lives Matter power play is the way it has drawn out the hordes of the unreal world, the internet-obsessed Woke fantasists, criminals and Antifa types were moths to the flame of 2020s “uprising”, their worlds then collided spectacularly with reality.

There are myriad examples for us to point at and smirk but the most obvious example was the Seattle CHAZ commune — a no-go zone — which was touted as a new summer of love, a 60s style hippie “be in” but which quickly descended into a bizarre Lord of The Flies type scenario in which several people were murdered and all the worst aspects of human behaviour were on display.

This should have been the point where all the Woke social media junkies stopped and took a good look at themselves, their Altamont if you will, however, because such folk are infected with postmodern thought nothing means anything to them, there is no shame, no reflection upon their actions and no guilt. CHAZ was a location in time and space where Woke fantasy collided with the reality of ethnic and class differences between black and white Americans and generated nothing but scorn and ridicule from residents and business people [although those residents and businesses voted for it by their choices – ED].

It is not just progressives who are falling prey to toxic ideas such as Wokeness, the putative resistance, which itself is organized entirely in cyberspace, is riddled with bad actors and fantasists. Our local example is Tom Sewell’s National Socialist Network, a neo-Nazi offshoot of the defunct patriot movement of 2015-16.

The NSN are as far adrift from reality and the authentic experiences of the everyday person as any Extinction Rebellion or BLM devotee, their boys-only club was based on fantasy and fiction and collided spectacularly with the real world on several occasions, eventually leading to the arrest and remand of group leader Sewell on serious charges.

Again, in this example, we saw a group so lacking in self-awareness and so caught up in their narrative that they appeared to all, even erstwhile comrades, to have flipped their wigs.

This detachment from authentic experience and immersion in fantasy on the part of so many citizens is why Australian Nationalism finds itself at odds with both the Woke and the counter Woke forces, they are, as ever, merely two sides of the same coin and present identical problems for nationalists.

The antidote to wokeness is authenticity and meaning, nationalists are hated by both sides of that coin because we insist upon those two ideas while also eschewing far-right hysteria and the morbid nostalgia of the conservatives.

This is the true radicalism of the 21st century.