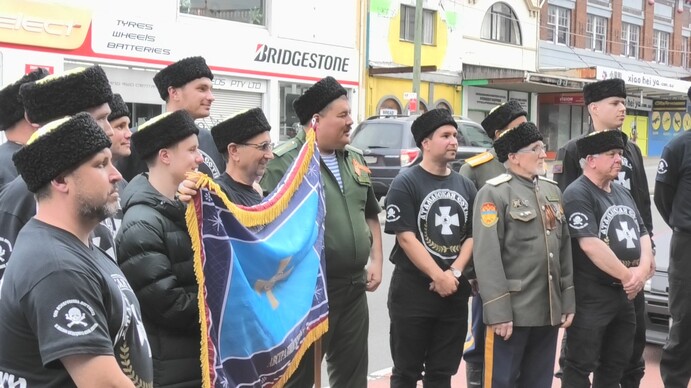 Australian Nationalists were welcome guests of the Australian Cossacks as a part of their May 9 Celebrations last Sunday. This is the day when Russia records its victory over German forces in the Great Patriotic War for their homeland.

Earlier, as a gesture of friendship between the Cossacks and Australian Nationalists, Dr Jim Saleam presented their leader Simeon Boikov with a Southern Cross flag, which was gratefully received. The two Nationalists were invited to join the Cossacks in a group portrait.

While a long way from home, those present watched the great Russian military WW2 victory parade in Moscow’s Red Square on a large screen, to much cheering and clinking of glasses.

One of those who was the recipient of a warm toast was Alexander, a veteran Cossack, who’d received a special medal from Russia acknowledging his years of patriotic service and his current fight with cancer. If only in Australia such rewards for patriotism were handed out, instead of jail sentences, and cancelled bank accounts.

The guests were acknowledged by Mr Boikov with a friendly toast. Later on, Dr Jim Saleam was invited to make a speech. He spoke about Victory Day, using the opportunity to make a point about the previous ceremony at Waverly Soldiers’ War Memorial in which certain Jewish community leaders and NSW officials appropriated the memory of that war while ordinarily they are inciting against Russia.

Dr Saleam told New Australian Bulletin, “I am very grateful to the Russian groups for inviting me to their dinner, and allowing me to speak on the subject of neutrality and why their deep patriotism in this fractured modern globalist world will serve them well.”

Meanwhile, Mr Sykes spoke to many Russian guests articulating his hope that one day Australia will have a patriotic leadership that will offer its friendship to Russia.

“Putin is a statesman we can admire,” he said. “There is no Critical Race Theory in Russia, no anti-discrimination laws being used to suppress free speech, no Black Lives Matter movement tearing down statues of our historical figures and past heroes. In Russia, a man is still a man and a woman is a woman. That Putin resists these poisons emanating from the West is what makes him all the more appealing.”

Not readily understood in Australia, the history of the Cossacks and the nature of the Russian victory are involved topics, which we will not be expatiating here. Suffice to say that it’s nothing to do with a ‘Communist’ celebration over fascism, but rather a victory of the Russian people over an invading people bent on conquest. As Putin has heretofore said, as far as Russia is concerned, that war is over and no grudges are held. If only the same grace was to be found in the West.

The categories that one may assume, do not apply here, and it’s nothing to do with the Communists and anti-fascists. Instead, it’s simpler to understand that day as emphasising the victory of the Russian people – and today it’s a perspective of traditionalism as valued under Vladimir Putin, Russian President.

One thought on “NATIONALISTS JOIN COSSACKS AT VICTORY DAY DINNER”