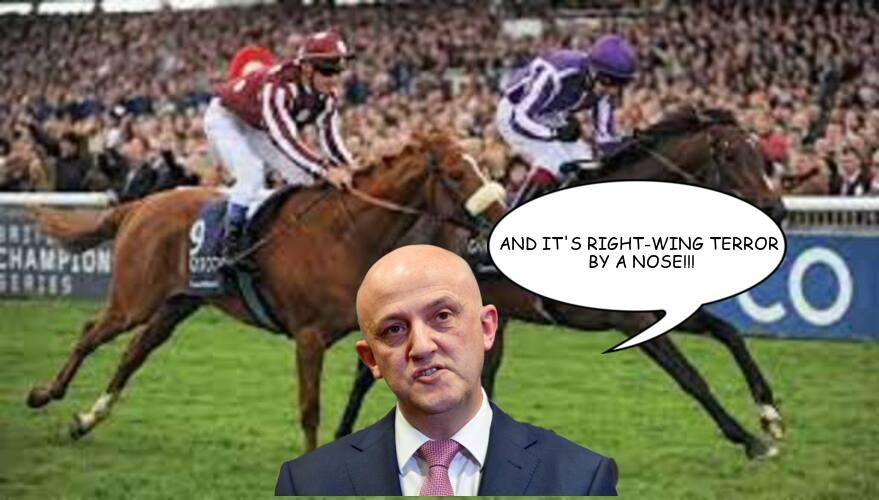 Mike Burgess, director-general of the Australian Security Intelligence Organisation (ASIO) is giving even odds on a two-horse spread in the terrorism stakes.

He’s predicting a terror attack this year on Australian soil but won’t be drawn by punters on whether he’s backing a Sunni Islamicist attack, or his new favourite, a far-right-wing security threat.

Speaking today out of his clacker, the bald idiot told a parliamentary inquiry “If you look at our current caseload, we still think Sunni based violent extremism is a major concern.”

This tip had many chasing down the TAB with a pick on Sunnis for a terror win this year. But Burgess was keeping coy about whether he’d go for a place and not a win with right-wing terror, adding, “However, given the growth in nationalist and racist violence we have seen (?-ED), we anticipate there will be a terror attack in the next 12 months.”

Pressed by bookmakers to expand on his choices, he said, “It can come from either ideology and therefore for me doesn’t really matter, because they’re both capable of conducting acts of violence and that’s where we focus.”

Arty Waterhorse, of the famed Waterhorse family, sees Mr Burgess as hedging his bets. He told NAB, “I reckon Burgess doesn’t want to tilt the odds either way.”

Nevertheless,  Deputy Commissioner of the Australian Federal Police, Ian McCartney (no relation to Paul) has made no bones about where he’s putting his money. “It [far-right extremism] is the fastest-growing threat, but at this stage, it’s not the predominant threat.”

While this may signal an intention to back Sunnis for a win, Waterhorse believes the AFP knob-jockey may be looking for a dead heat. “Both he and Burgess are giving indications that each is just as likely.”

Tony Larch, from the Association of Terror-Threat Bookmakers (ATTB), won’t be pressed for whether he’s hinting that it’s a fixed race, but he controversially told an ATTB meeting today, “Think back to the Hilton Hotel. The only ones who had money on ASIO were ASIO staff themselves. That was a long time between photo finishes for those backers of Tim Anderson who thought they’d taken the pot.”

The smart punter will pick his favourite by judging the form guide, and in this case, that’s the Sunnis by about 2-1. For those willing to take the longer odds, the far-right is offering 10-1 on recent form, given that no clear winner is evident. Judges had to call for a photo finish on the raids of members of the National Socialist Network (NSN) in two states since the only hint of the ‘bomb’ counter-terrorism is claiming was a bottle of crushed sparklers, which didn’t satisfy the judges, handing the finish to the Sunnis once again.

Clearly, ASIO is hyping up their long-odds favourite but again, the judges wouldn’t approve the allowance. In this case, the horse was underweight as was its rider. Still, even if there isn’t a clear winner, it’s sure to be a race that keeps the punters entertained!

As yet untested on the track is far-left wing terror, which has fallen out of favour with the bookmakers since ASIO isn’t prepared to give them a start just yet.

However, word of mouth indicates that they’ve been showing strong promise in the gallop and will be in top form come derby season.

SUPER RAT ERIKSON BACK IN THE GAME

3 thoughts on “ASIO CHIEF WARNS OF TERRORIST ATTACK: WHO SHOULD YOU BACK?”