MORRISON MESSES WITH NATIONAL ANTHEM TO PLEASE THE ABO LOBBY

TROTSKYITE BLM LEADER TROTTED OFF BY POLICE AMID RALLY FIZZLER

SYDNEY BLM IS A FRONT FOR RADICAL MARXISTS

SEATTLE’S CHAZ GETS THE CHOP 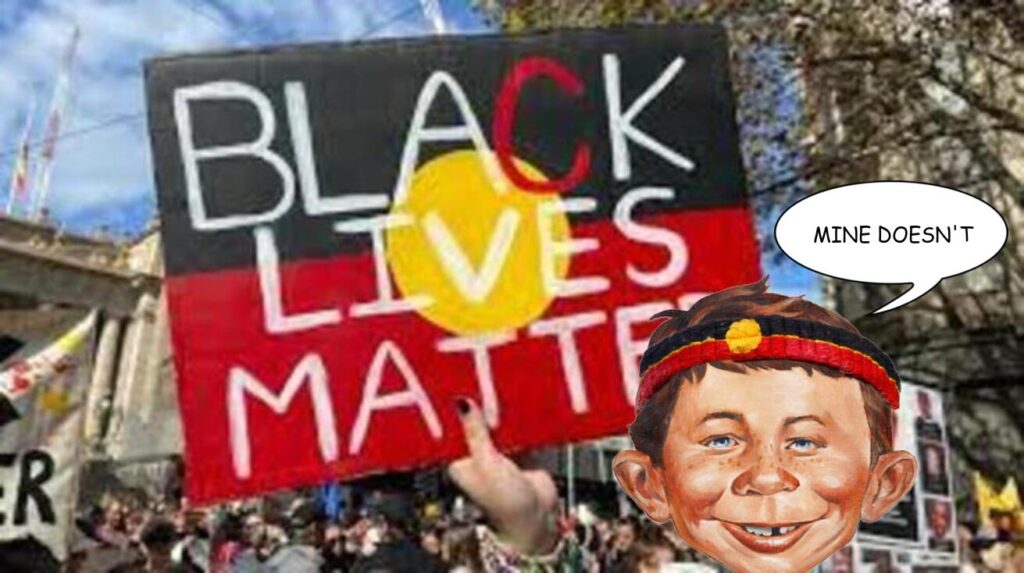 Aboriginal deaths in custody are again in the news, the Greens mid-wit Lidia Thorpe is on the warpath, backed by her mob of “indigenous” misfits, drunks and morons with the usual rabble of senile communists and White bourgeois adventurers bringing up the rear.

People die in prison every day from a variety of natural causes, usually linked to the criminal lifestyle; hepatitis, for example, is rife among prisoners, many also have long term physical damage brought about by habitual drug use and a lifetime of neglecting their health.

For an aborigine, who may have had the cards stacked against them from the beginning due to parental neglect prison, as horrible as it can be, is often a chance to improve their wellbeing, a roof over their head, three meals a day and accessible medical treatment are something most of us take for granted.

Astonishingly though, some people seem to become less healthy while locked up, for example, the latest cause célèbre of Lidia’s mob, Victorian man Michael Suckling.

Suckling died in March 2021 at Ravenhall correctional centre on Melbourne’s outskirts, where he was serving a ten-year sentence for culpable driving, having killed an associate in a smash at Castlemaine in 2018.

The details of the fatal incident reveal something of Suckling’s character; while drinking with three friends at an address in Castlemaine he had become enraged and thrown a shovel through a laundry window, striking and injuring one of the other men.

Rather than call an ambulance and possibly have to face the consequences of their actions the grossly inebriated four decided to drive their wounded cobber to the local hospital. Suckling, at the wheel, gunned the car through town at speed of up to 140 km per hour and, some would say inevitably, ran the vehicle into a pole killing one passenger and injuring the others.

When arrested Michael Suckling gave a breath test which recorded a blood alcohol concentration over three times the legal limit.

This is not the most appalling part of the story because while in prison Suckling, who was not a large man, was able to gain an amazing 140 kg weight becoming so obese that he could not wear shoes and could only walk with the use of a cane.

Days before being found dead on March 7 this year the prisoner had suffered a suspected stroke and been provided with medical attention, however, he refused any further treatment and was found unresponsive by his cellmate at morning muster.

Quite how a person under state supervision was able to physically deteriorate to such an extent boggles the mind, if he were an Aboriginal child his morbid obesity might be grounds for removal from his home and a stint in foster care to recover and lose weight.

Prison food isn’t too flash but it’s not sugary garbage all the time either. It is a far cry from Henry Lawson’s recollection of near starvation during his stint in Darlinghurst jail all those years ago, so it boggles the mind how a man more than triples his body weight in three years while inside.

Nevertheless, the loud “Black Lives Matter” groupies thought it right that they should, as usual defying all rules on public gatherings, stomp through a near-deserted CBD down to the Victorian parliament for a public whinge on Suckling’s behalf.

Michael Suckling is a rotten example of Aboriginality if you were trying to gain sympathy for blacks in jail, he is a poor example of a person in general and like most of the other supposed victims in this narrative, he probably did more harm to his kin that any White man ever did.

As our editor points out, why should any of us care? The black life in this case didn’t matter much to the black whose life it was, otherwise he would not have assaulted a mate, driven drunk and eaten himself to death at 41, instead of reforming himself and hitting the weights while in stir.