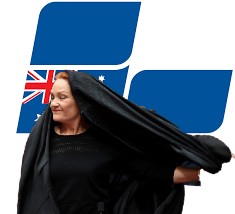 The following article is shared from our friends and fellow Australian Council of Nationalists member Australia First Party from their website.

Pauline Hanson has called for a ban on the swastika and other ‘hate symbols’ because Australians “don’t like racism.”

In a classic Hansonesque double-cross, the 66-year-old faux-nationalist has once again come out with a statement that displays her political and social commitment to Liberal Party causes. Many years back she stated while being photographed with two African Picannines that “you don’t have to be White to be Australian.”

This time, as the government finalises its preparations for an inquiry into ‘far-right extremism’ possibly to proscribe nonexistent organisations, she of the red hair and a greedy streak a mile wide wants “symbols” of hate on the agenda so she can keep in good stead with her conservative controllers.

Those Australians who voted for her have simply set up a shyster in a sinecure that was a better choice for her overall financial security than her fish & chip shop was all those years back. One of the reasons they supported her was her alleged commitment to “freedom of speech.” Lately, the political train wreck has found that to be overrated.

An incident that triggered Hanson’s Liberal-advisors into suggesting this cunning media prank was an image taken last Friday of a man shopping at a Melbourne grocery barn while wearing a swastika armband. Nationalists don’t have any love for imported fascist imagery, but the concept of weaponising historic symbols is a pathway to thought crime, which, of course, is a bit late since that road is already built.

There is no ‘Nazi party’ in Australia, therefore the displaying of such symbols in not a political act but an act of provocation. Those who choose to provoke in this manner are only playing into a narrative that creates a rod for their own back. Such as when the young fools from the National Socialist Network (NSN) made a public statement out of their presence at Victoria’s Grampians’ camping grounds last Australia Day, executing Roman salutes and burning a cross to garner the hysterical publicity that fuels their notoriety.

Hanson’s statement read, “People who wear or parade these symbols have lost all sense of decency. They’re promoting racial hatred and vilification and are at the very least in breach of Section 18C of the Racial Discrimination Act.” So, she’s a lawyer now? No, that wouldn’t put the symbol in breach of the Act or the Victorian man whose parading of the armband would be facing charges right now. But that’s where Hanson and her handlers want this thing heading. She went on: “They’re symbols that rekindle fear and even terror in the hearts of hundreds of thousands of Australians. Holocaust survivors (like, yeah, there are so many of them-ED) and their extended families along with immigrants from ISIS dominated countries in the middle east know all too well what the symbols stand for . . . And by protecting those who display them by not banning their use and display across the nation the Federal Government is contributing to those feelings of fear.”

Dr Jim Saleam responded to questions about Hanson’s latest stunt by commenting, “Hanson is doing another job for the liberal party. She doesn’t want her followers to see that the whole Nazi thing is a total red herring because essentially there are no Nazis. The Liberal party wants to create a huge political red herring to shift the paradigm of discussion on the issues of terrorism. What do they pay you, Pauline? As for the remarks about ISIS, the whole thing is laughable since it was the US that funded ISIS and its ‘terror’ campaigns.’”

Her speech reads as though it was written by Dvir Abramovich, Australia’s foremost Zionist agitator. Ms Hanson needs reminding that what is ‘un-Australian” is demanding the curtailing of rights and freedoms of expression. The state is the greatest spreader of fear and right now the Government and its auxiliaries are attempting to whip up fear of a ‘Nazi threat’ that is simply nonexistent, despite the costume play of a negligible number of children who’ve fallen under the sway of a rapidly ageing self-styled ‘fuhrer’. Not now, nor ever, will those kids present a political problem, as Australians don’t’ need to be persuaded by regressive laws. There is no mainstream desire to see a ‘Nazi party’ in Australia, end of discussion.

Yet, such a ban, if Pauline and her Zionist conspirators got their way, would have unexpected consequences. Take, for instance, the Shubhakaman Restaurant in Rockdale, just down the Princes Highway from the Tempe Australia First Party headquarters. The display of the ‘swastika’ is very prominent in their shop but we don’t need to ask them whether or not its use is to stir up fear among the community.

Hanson Is An Idiot News

One thought on “HANSON CALLS FOR SWASTIKA BAN IN LATEST STUNT”