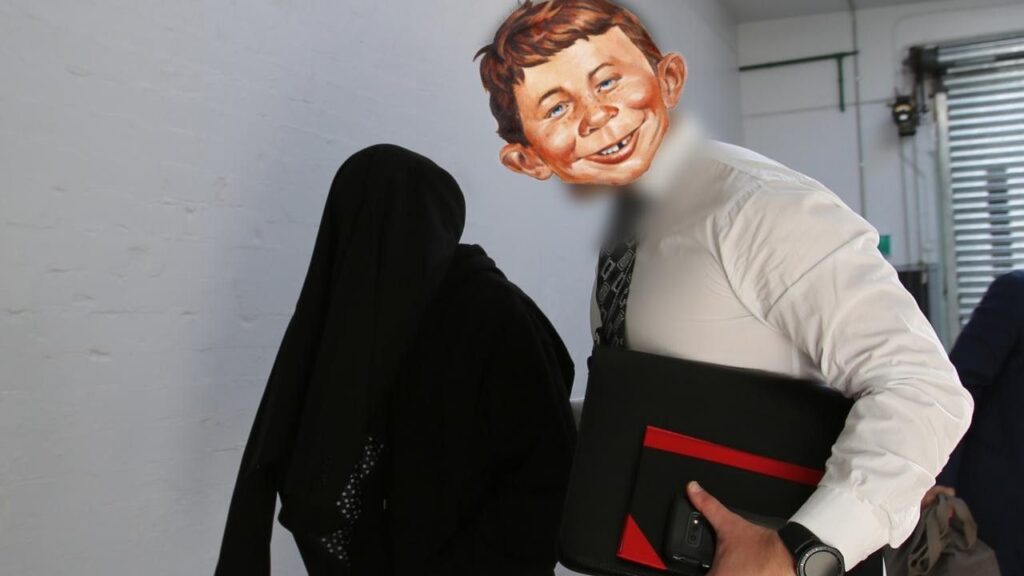 The arrest this week of 18-year-old Albury lad Tyler Jakovac on terrorism charges re-energised the calls by the American-born evangelical-Christian Labor senator Kristina Keneally for a parliamentary inquiry into right-wing extremism. It has also predictably acted as a “gotcha” vehicle for the usual gaggle of rat-chewed Antifascist extremists who splash their muddy waves about in the Facebook sewer.

Jakovac’s arrest was another convenient propaganda PR moment for counter-terrorism made at the time that the report from the NZ Royal Commission into the Christchurch outrage was to be published.

The parliamentary joint committee on intelligence and security quickly rubber-stamped the inquiry which will be chaired by, of all people, Liberal MP Andrew Hastie, the ex-SAS officer and member of the bipartisan club of Sino-cautious MPs known as the Wolverines. According to reports, they will look at “all forms of extremism in Australia” and not specifically the far-right. Which doesn’t exist anyway, except in the bedrooms of naughty boys posting as the NSN on Telegram and other ineffectively encrypted social media networks.

Nevertheless, Kristina Keneally and her Labor colleague Anne Aly went into full-on virtue-signalling mode upon hearing the news, however, Deputy PM Michael McCormack, when interviewed on breakfast television, seemed lukewarm on the idea of such narrow terms of reference.

For one thing, such a sensational probe would seem to signal that either the security agencies are not doing all they can to prevent political violence from the right, or the fact that such cases are few and far between indicates that the problem has been massively overstated.

Much has been made of the fact that Brenton Tarrant, the Christchurch mass shooter, is an Australian native and that he was radicalised, or rather driven mad, on the internet, therefore any unbalanced White Australian boy posting nonsense on social media must be treated as an imminent threat and locked up.

The same can be said of the response to Islamic terrorism, Australian authorities have been quick to jail any teenage internet Jihadist fanboy, but from time to time the genuine article slips the surveillance net and carries out a successful attack, or comes very close to it.

The point is that Tarrant could not have carried out his crimes in Australia due to the strict gun laws so there is evidence that he emigrated to New Zealand, where automatic firearms were more freely available, with the express intent of carrying out a “spectacular”.

By extension we can also assume that the desire by budding Islamic extremists to travel to foreign conflict zones and join the Jihad is influenced by the same type of thinking: the system in Australia is not conducive to violent activism, so they wish to move to a place where the system permits such actions.

Jakovac is accused of seeking firearms training to carry out a mass casualty attack of some sort, but this is more than likely a result of his online activity than any realistic, real-world plot. The same can be said for Phil Galea who was jailed for 12 years for what was essentially just ambrosia-inspired braggadocio.

Mainstream social media is chock full of firearms training material produced in the United States, every make and model of weapon would have its series of instructional videos on YouTube and a dedicated community of law-abiding shooters willing to answer questions.

The problem for the aspiring mass killer in Australia is that to get hold of an automatic weapon would mean dealing with serious criminals who would charge a fortune for a gun and ammunition if they didn’t rob the buyer outright or turn him in. It is also understood that known Australian gangsters have been told in no uncertain terms by police that if any of their illicit weapons land in extremist hands the seller will be also charged with terrorism and thrown into Supermax for a very long time.

Jakovac’s actions then were unlikely to lead to any great harm in the real world and since police have admitted that they have had him under surveillance for some months I have to wonder why he wasn’t immediately grabbed and referred for psychological counselling and de-radicalisation?

Radicalisation happens when a person’s thinking and behaviour become significantly different from how most of the members of their society and community view social issues and participate politically. Only small numbers of people radicalise and they can be from a diverse range of ethnic, national, political and religious groups.

The Living Safe Together website, a government-run catch-all which is a wholly unsatisfactory depository for information in you’re trying to figure out the convoluted stream of departments which interconnect in regards to ‘counter-terrorism’, defines violent extremism as follows:

We cannot help but to highlight those definitions and the irony of journalists such as the tub-thumping Guardian propagandist, Jeff Sparrow, harping on this topic, as he did this week in an article for their website ‘Australia Must Reckon With The Fact The Christchurch Terrorist Developed Much Of His Hatred Here’. In a concluding paragraph, he had the chutzpah to write “In the context of post-Covid economic uncertainty, you can find fascists all over platforms like Parler and Gab, trying to turn rightwing (sic) populism into racist violence.”

This is especially rich since his brother, fellow anarchist Professor Rob Sparrow, published an essay in 1999 available on the ‘Anarchist Library’ website entitled ‘Anarchist Politics And Direct Action.’ Sparrow’s bro had this say:

“The traditional anarchist hostility towards the state then should be tempered by the recognition that, while it continues to exist, it is an important site of class struggle. If we reject attempts to exert pressure on the state, we may render ourselves irrelevant to the real needs of large elements in society.”

This is the Anarchist version of ‘mainstreaming’ which shows just the effect that Rob Sparrow AKA ‘Andy Fleming’ AKA Slackbastard has had on the Anarchist milieu along with his clique of Melbourne Professionals and Academics. We make mention of this par to show the reader how it has long been his charter to influence ‘the state’ and for his troubles has been rewarded with commentator status when it comes to ‘the far-right’. But what else had he to say?

“The first implication of the politics of direct action with regards to our relations with the police is that, wherever possible, we should disregard the authority of the police. Direct action is action which acknowledges our own power and right to exercise it. To the same extent that we recognise the authority of the police and obey their instructions we are relinquishing our own right and power to act as we would wish to. So, it is actually essential to direct action that we do not concede the right of the representatives of the state to restrict our activities. Of course, for tactical reasons, we may have to acknowledge the consequences that may occur when we ignore the law and may even have to negotiate with police in the attempt to minimise these. But it is important that, in doing so, we remember at all times that although they have the means to do so, they have no right to restrict us in our liberty.”

In other words, while he and his ‘Anarchist-Antifa’ colleagues applaud the Counter-Terrorism lug nuts for throwing around the full weight of their federal budget allotment in Pythonesque raids on kids’ homes, they hate them and don’t regard the law as being true. So, what are they applauding and why? But we mustn’t interrupt the Professor when he’s proselytizing:

“The only form of “direct action” which cannot be contained by the state is popular revolution. This is the ultimate direct action that anarchists should aim for.”

Well, there you have it. Revolution. Excuse us, but that satisfies all the definitions befitting this bogus inquiry’s terms of reference. He is calling for armed revolution, plain as day, advocates incitement against the police, and yet he’s welcomed as the commentator on supposedly the ‘real terror bogey’ as the emphasis on Islamic Terrorism is wound down. His brother, meanwhile, tugs on the strings of the nation’s conscience from his keyboard in the offices (or from home) of the Far-Left Guardian, a more harmful Pommy import than 10,000 soccer hooligans.

Yet, who informed this Living Safe Together report back in 2015? None other than the egregious Southern Poverty Law Centre, a cabal of Jews who recognise hate is only White, and to some extent when it affects Jews, black. It is the most partisan collection of propagandists with more money at its disposal than the entire Columbian drug cartels combined. This is perhaps why Living Safe Together has decided that terrorism occupies three “broad” (sic) categories: ideological, issue-based, and ethno-nationalist/separatist. Ideological, apart from denoting “neo-Nazi type beliefs” also takes a crack at the Christians, with a view to anti-abortionists etc, which, again, keeps it safely in the parlance of the mythical ‘Far-Right.’ Issue-based pertains to animal rights freaks and eco-terrorists, and the rest is all Uncle Adolf.

Despite our research, this mythical ‘at risk of radicalisation’ caper doesn’t seem to fall between the lines of any of the Counter Terror and Specialist Groups. Yet, if they were sincere, they would’ve intercepted Jakovac and ‘de-radicalised’ him. But that wasn’t the payoff they wanted, their wish-list requested a ‘terrorist’ and that’s what they handed the Australian public.

The handful of so-called “far-right extremists” nabbed in our country, as well as Brenton Tarrant, seem to be lonely, socially inept internet addicts with mental problems who could probably have been successfully medicated and counselled back to the right path, rather than being allowed enough rope to publicly hang themselves.

In all truth, if Tarrant hadn’t had the crutch of ‘right-wing extremism’ to use as a justification for his actions then it would’ve been something more random and less easily classifiable. The fact is, his antisocial rage had pent-up and he was going to release whether or not the Alt-Right had been popular at his time of social media infection.

Terrorism of the sort seen in Christchurch has a low probability of success in our country, if federal politicians cared about nipping any potential extremism in the bud, rather than cynically beating up cases for partisan propaganda, then they would be demanding a targeted approach such as the Victorian model and accountability for foreign social media companies, whose products play a huge part in the problem of violent extremism.