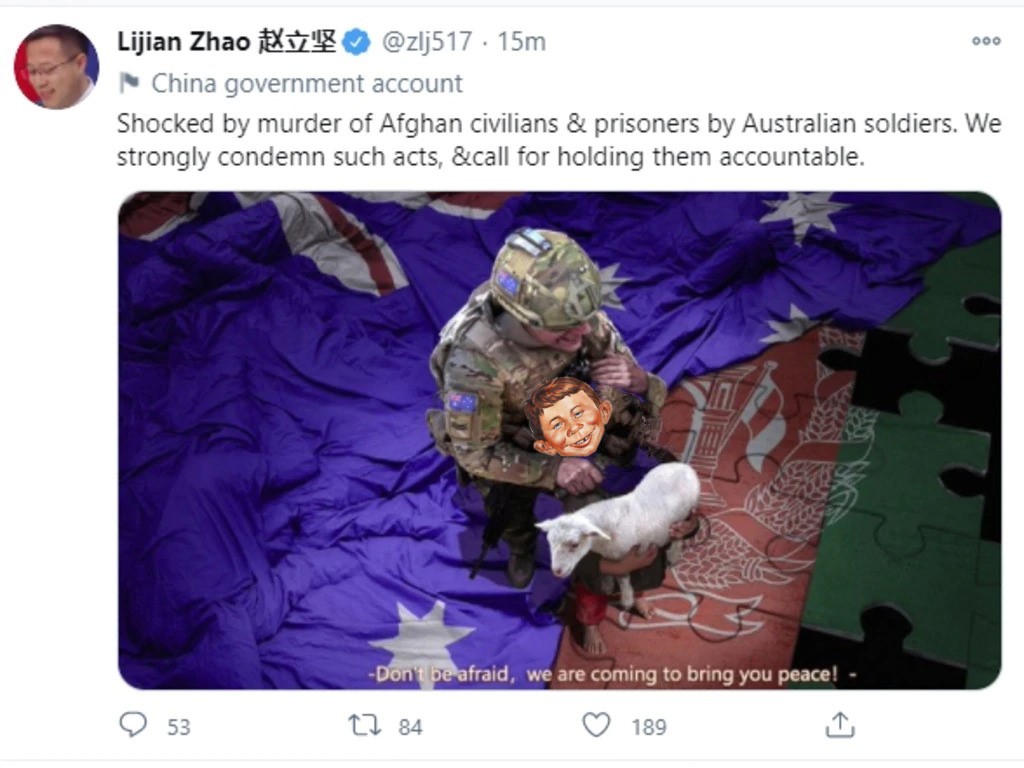 China has upped the ante in its global-sized dummy spit against Australia by taking to Twitter with a meme that wouldn’t be out of place on a troll’s Facebook page.

Today, Beijing’s Foreign Ministry spokesman Zhao Lijian uploaded an image of an Australian soldier slitting the throat of an Afghan child inside of a mosque. It’s a fake picture, but it is captioned, “Shocked by murder of Afghan civilians & prisoners by Australian soldiers. We strongly condemn such acts and call for holding them accountable.”

Of course, this is cynicism at its snidest. Fancy China, whose Human Rights record is equal to that of Genghis Khan wagging the finger at us. China is the megalithic neo-terrestrial ant-farm where human organs are harvested, prisoners are routinely executed, Tibetans are murdered along with the Uighurs, and anyone else they don’t like.

Oh, and let’s not forget the massacre of its citizens at Tiananmen Square. And, not to mention COVID-19 — a virus which has spread, not so much the flu-like effects, but the symptoms of totalitarianism of the regime that incubated it all around the western world.

But that’s not the point because the hypocrisy isn’t meant to be recognised as China’s but as our own. China just wants us to be reasonable and do everything that it tells us.

Prime Minister Scott Morrison responded with a TV address that Sky News is applauding, comparing him, disgustingly, to a “war-time Prime Minister”. If by that they mean John Curtin, for shame! At any rate, Morrison’s version of apoplexy is akin to a jolly village pastor trying to square-off against the world boxing champ. He denounced the Tweet with all the rage of an angry goldfish, remarking, “It is deeply offensive to every Australian, every Australian who has served in that uniform, every Australian who serves in that uniform today … it is utterly outrageous and can’t be justified on any basis whatsoever.”

More pointedly, he added, “It diminishes China in the world’s eyes.” Yes, but not in the eyes of mad-dog Islamic terrorists. How did we get to this?

It started back with Richard Nixon and Henry Kissinger propping up the Chinese economy and setting them on an irreversible rise to superpower status. That’s just for starters. It continued with dead parrot Sinophile Bob Hawke opening the floodgates when both sides of Australian politics and every industrialist they serve welcomed China with open arms and blank chequebooks. Scott Morrison himself, when he was Treasurer, signed off on the sale of Kidman Cattle Station in a joint deal with mining oligarch Gina Rinehart and Communist China-based company Shanghai Cred.

His mate, the traitor Andrew Robb, was momentarily peeved at his boss for blocking the sale. Until it wasn’t blocked. Then there is the Education Sector, and the universities, which were so addicted to Chinese money they let Beijing take control of our institutions of higher learning. We could go on and on about the fifth-columnists like Sam Dastyari and Arab pimp Shaoquett Moselmaine. We could remind our readers that the NSW Premier Gladys Berejiklian was having it off with disgraced former member of the NSW Legislative Assembly Darryl Maguire who was bloated from stuffing himself with the cash from dirty deals with Chinese developers.

Having wooed China with every expectation it could stick its finger wherever it liked in our national body, to please the Americans, Morrison’s government suddenly turned frigid. Having become upset over our recalcitrance on key issues such as China spying on us, buying into sensitive infrastructure, and infecting the world with its Kung Flu, the communist dictatorship has been ragging Australian trade and taking cheap, adolescent swipes at us.

It reminds us of that sketch in the Monty Python classic The Holy Grail, in which John Cleese dressed as a French knight goads Arthur and his coconut-clapping litter with churlish insults.

It is an absurdity on the scale of the plot of Dr Strangelove but it is geopolitics in the age of China. It’s a very simple equation, give China everything that it wants or it will scream and scream and scream, halt trade, arrest any Australian it finds, wage a massive cyber-attack, insult you on Twitter and finally send in nuclear warships to blow you out of the water.

In that sense, all those myths about the stoical grandmaster and the wise Oriental people are blown, for, as you can see, they throw a three-year-old’s tantrum at the first disappointment. Seriously, why would we be worried about these jokers taking over the world? They’re so hungry for global power they’d choke on Taiwan before they could project their military anywhere near the Japanese coast.

However, we’d be amiss not to mention that self-serving journalists like Nick McKenzie — who ironically is featured heavily in Professor Clive Hamilton’s excellent caveat about China, Silent Invasion for his reports on China — gifted China with propaganda regarding our SAS Servicemen and their alleged “atrocities” in Afghanistan.

On that level, there is a fair-enough point to be made, only, it’s not the soldiers to blame but the scum who sent them there. The whole military enterprise was a crime. Nevertheless, in Afghanistan, there is no law, and any damage inflicted by our boys should be considered as being deserved on a rule of general principle.

Thus, those tweakers of the national conscience, like McKenzie, do what they do not out of an expansive sense of moral justice, but because they want kudos as human rights heroes. Both he and everyone who works for Nine Entertainment should be dragged out to an oil rig and fired upon by our navy.

China is well aware of all the damage being wrought by Social Justice Warriors and Progressive “Woke” vandals in this nation and they’ll happily use their rhetoric in the theatre of geopolitical propaganda. They will especially use it as a wedge to help divide us. Rather, they’re well aware that multicultism already split the country, as much as it’s all-but destroyed the USA.

The Australian Government has called upon Twitter to remove the offending Tweet, but in classic algorithmic social-media-platform style they’ve failed to respond. They’d be unlikely to, anyway, as the rhetoric would appeal to the global-resetting social-worker billionaire set behind such things.