SYDNEY’S CBD IS AN ASIAN GHOST TOWN — AND SO WHAT? 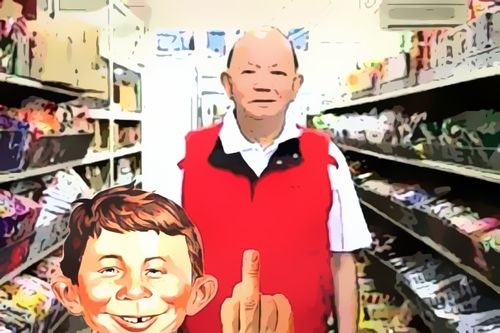 A report today in the crypto-woke Daily Mail revealed the human face of the impact on Sydney CBD businesses in the worst recession for 30 years and we are unruffled.

You would be forgiven for thinking the images were taken in Kunming, Malacca, or even Choa Chu Kang.

The net result is, this ‘tumbleweeds through the CBD’ yarn is coming as more like good news for those who’ve found the Asian facelift of Sydney intolerable to every fibre of our being.

If these lizards go out of business and have to consider packing up and heading back to the old duck farm, then don’t let us stop you — we never wanted you here in the first place. Your businesses drew thrice the number of oversized rats of any ever owned by an Aussie and that’s the truth.

What truly impresses us is that the Daily Mail, an ally of the anti-White vanguard, is so inured to its propaganda that it doesn’t perceive the reverse effect showing this marvellous result would have on patriotic Australians. By that, we mean TRUE Australians; WHITE Australians. The fact these bottom-feeding yellow invaders are facing bankruptcy, having fed off the teats of the globalist pigs is welcome news.

The Daily Mail is the kind of vile propaganda-with-advertising site that cannot illustrate a story about Tradies without a woman instead of a bloke, given women would count for about 0% of all tradies. Likewise, if the story is about the armed forces, ditto, cosplaying sheilas in army fatigues. Or if it’s about “Aussies” then it’s a buck-toothed smiling Asian face or Negro; even though the introduced black species didn’t proliferate in Australia until the new millennium. Remember, that England is as guilty as America for the creation of Woke, and the DM is a Pommy institution which we need commenting on our affairs like we need Xi Jinping running our treasury.

We’re not bothering with the statistics in the story either, the baffling figures that put a mathematical equation to human misery, but we do acknowledge that it’s sad that one or two holdout Australian businesses must’ve been affected. By and large, however, one couldn’t walk through Sydney’s CBD arcades over the past 20 years and even find a retailer or diner staffed, much less run, by Australians.

How is it supposed to bother us that a pack of Orientals welcomed in only by the taxing class won’t have anything left to tax anymore?

The truth for many Australians born after the 1960s is that much of their lives have been spent in a permanent recession with one or two years of respite here and there when employment has become available. For those who aren’t lucky, haven’t enjoyed a long wave of self-resource, then life has always been renting; borrowing; living hand-to-mouth for long stretches. This idea that a “recession” has swung in and everyone — even those who’ve been perennial outcasts of the employment temple — are supposed to give a fig is right up there with Black Lives Matter. Neither does to anyone who resents the cultural-social-political-appropriation by the coloured races as they do the economist blowhards trying to scare us, when all along, we’ve been victims of a White recession.

Want to make the situation better? Kick out all of those coloured imports that arrived as fake students etc, that’d free up the labour market. As much as increased immigration is the holy grail of government thinking on economic advancement, subtracting immigration is the key to managing those who need it: real Australians. Let’s delineate our economy by our people and not a polyglot of Asia and the subcontinent.

Thereafter, it’s time to nationalise to survive… But while we’re on the topic of the job market, how about changing job culture while we’re at it. This ‘two-year-career’ cycle driven by our intersection with the global monetary system has affected a nomadic approach to living while generating record levels of anxiety among the population.

It’s not just a matter of the uncertainty about employment, which is a hazard of business, it’s the internal politics it creates in the work environment, particularly offices. It is made this way by those types who’ll sacrifice anybody to remain safe; by managers and higher, whose slack performances are rewarded with advancement rather than punished by termination. No matter how useless these people, they’ve learned the secret is to how their tongues caress the orifices of their superiors. If you thought for a minute that type of cronyism was dead think again, it makes the world turn; always has, and unless changed, it always will.

Therefore, we find the paradox of hardworking individuals, who are naïve enough to believe that by overstretching themselves; by being seen to be highly motivated, will be rewarded; when they’re often the first tossed away in any shakeup.  Then are those silent sufferers of the workplace harassment which occurs like schoolyard bullying and nearly always has no recourse to resolution for the victim.

The very concept of Human Resource departments is misunderstood by people since they exist purely to protect the bosses, and even the guilty, since to admit someone was guilty would reflect badly on the bosses. Workplaces can be, and in more instances than not are the worst places in the world. What makes them worse is that the unhappy employee knows that it’s either cop what’s dished out or go back to the job network parasite. Out of one frying pan and into the other; this has been the reality before COVID-19 and if it’s smashed to pieces then we’re hardly about to shed any tears. Most of us nationalists were forged by suffering, and given our having fallen afoul of the system by being nativists in the first place, we have been made non-citizens anyway.

A worker can rarely rely on union support either; since most are toothless and in a double helix with the bosses.

A customer service worker will get doodly squat by complaining to the SDA, since they’re notorious for being the other mob beside the employer who’s sucking them dry. Likewise, media idiots who might be experiencing problems from an employer for not being Woke enough are wasting their dough with the MEAA, who are, literally, a union allied with a pack of clowns — and who’d SIDE with the employer in any Woke matter.

So, don’t talk to us about the ‘worst recession in 30 years’! To believe anything has been sanguine to date is to prove you’re a cabbage-head who wouldn’t recognise a tidal wave if you were standing onshore in a raging gale.

THE NAZIS AND WHITE AUSTRALIA