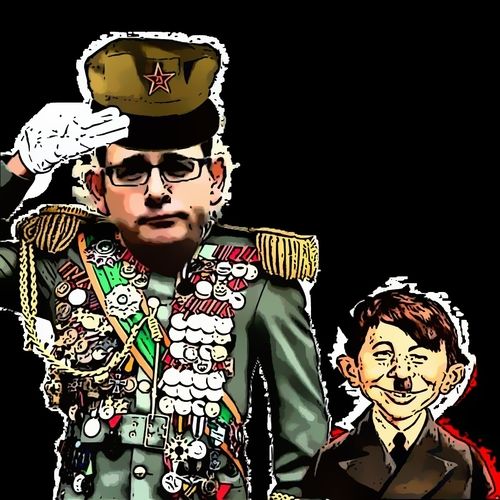 Daniel Andrews is set to become Australia’s first communist dictator after announcing his intention to extend Stage Four lockdown measures in Victoria from their September deadline for another 18 months. Doing so would grant him the same powers as his hero Emperor Xi Jinping (sic).

Having always craved unlimited control of his Victorian subjects, Dictator Dan is using the ‘crisis’ which his mismanagement exacerbated to sure-up his rule. If State Parliament passes the amendments to the Public Health and Wellbeing Act 2008 that he is seeking, it would accord his far-Left socialist government unprecedented rule over its subjects, which the ambitious dictator would be loath to rescind.

Victorians are already under the most extreme lockdown laws in the country, with police randomly arresting anyone who wanders outside without the proper permissions and identification.

From the conduct of the Victorian police, who so far have rough-handled Victorians in a manner befitting a Police State, they too have developed a taste for unconditional powers.

Dan’s new laws would allow his Police to raid the homes of citizens without a warrant, restrict individual movement indefinitely, place people under virtual house arrest, and enforce destruction of supposedly “infected” property, all in the name of health & safety.

Ex-Premier Jeff Kennett has called Dan’s dash to make himself a supreme leader as “diabolical”.

“This is an act of a megalomaniac,” he said. “Are we all going to be locked up at the whim of the Premier without any checks and balances?”

Jeff’s question is, of course, rhetorical. Andrews is a madman who is drunk on power. The only state leader who has so far signed up his state to China’s One Belt One Road, Comrade Dan is merely allowing his people a preview of what to expect when the People’s Liberation Army arrives at the Port of Melbourne.

In a ‘Danielsgrad’, Victorians will be subject to authoritarian-control of their movements, restricted in the numbers with which they will be allowed to gather, and would be at the mercy of Police intemperance.

Not possessing the correct ID will land you with crippling fines, and jail time. The property of Victorians will be subject to seizure, and no-one will have any legal recourse. What Dan says will go. Facemasks will be a permanent requirement even in people’s own homes, and they won’t be allowed to take them off at dinner. Instead, unhappy Victorians will have to make sure all their meals can be consumed through a straw. That’s just a joke. But as we’ve seen thus far, we can expect Andres to take it easy with his socialist mates, and those from the CFMEU, etc, but anyone on the Right side of politics will be fair game. This is just as he and his Socialist cronies have long envisaged their reign.

The reaction has been alarmed across the board. Shadow Minister for Housing, Tim Smith was forthright: “Andrews is out of control. He’s attempting to make himself a dictator, giving himself more power than any modern head of government has ever had. This is genuinely scary.”

Liberal MP for Brighton, James Newbury told The Daily Mail, “Total power should not be unaccountable. Victorians want to do the right thing but that shouldn’t allow any politician to have permanent power.”

Indeed, Andrews’ actions have echoes of Julius Caesar, although the vague comparison is where any similarity ends. Caesar was good for the Roman people whereas podgy Dan is more comparable to a Jumbo-eared Nero.

The minor parties are not impressed either. Former federal senator Derryn Hinch of the Justice Party has confirmed that two of his crossbenchers will oppose the bill.

“You can’t give any government an open check for 12 months, that’s not on and we won’t support it,” he said.

And, just like a real communist dictatorship, it will come with massive poverty and economic failure. That won’t affect Andrews or his politburo, who’ll have dibs on the best tucker and vino. They’ll eat like wealthy lords at the table of King Henry VIII while Victorians try to grow potatoes in their kitchen sinks, without running water and under the threat of arrest if they complain.

Jeff Kennett has often been credited with the economic rehabilitation of Victoria during his Premiership which lasted from 1992-99. He came out swinging against the flabby fuhrer, calling on Secretary of the Victorian CFMEU branch, John Setka, to put him right. Kennett suggested that Setka was the ‘only person with any influence’ over the Labor Party.

He argued, “If Andrews goes ahead with this there won’t be one of the CFMEU members who have a job next year. There will be no construction sites, those people will be joining the unemployment line.”

That wouldn’t bother the CFMEU or Andrews’ government, neither of which aren’t concerned with jobs, but with power. It’s an aphrodisiac after all, which is a scary thought for any small fluffy animals that might be hanging about near parliament. They won’t stand a chance with a randy Andrews seeking to sire an heir to maintain the rule of his dynasty.

His current family will be sent off to a gulag out the back of Moonee Ponds somewhere.