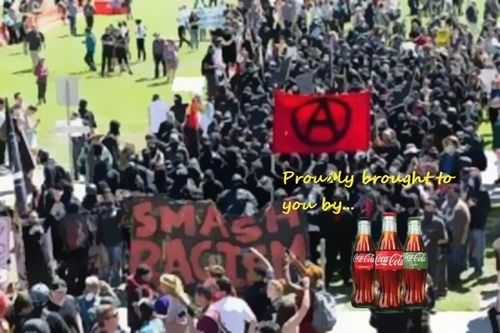 Erroneously labelled ‘The Left’, none has been so consistently inaccurate in their worldview than those who inhabit the numerous factions which that side comprises.

The Left once held a position that is now the province of what they (again erroneously) called the Right. Protectionism, nationalisation, immigration restriction — this was once the Left, while the Right was busily acting as a satellite for the anti-communist State. This meant that Capitalism, except to those of the extreme Right, was not an issue.

Capitalism was the enemy of the Yippie-Student-Marxist-Leninist-Trotskyite-Maoist Left and remains so. A primary beef they hold is that Capitalism induces ‘racism’. To their thinking, Capitalism is imperialism.

This is a mistake so crucial it’s a wonder that those who’ve spent so long studying the difference fail to perceive that capitalism is inseparable from anti-racism. Anti-racists safeguard the interests of capitalism.

When Malcolm Fraser finagled his way into the Prime Ministership in 1975 Australia had fully transformed. There was no way back to the White Australia policy, and those orbital groups that enabled the Liberals into office were jettisoned. Australia entered a new order. Preoccupied with the historic symbols of the British-Australian State, the old ‘right’ gradually went from being the State’s kelpies to its black sheep. A new hegemony had expanded from an American-loyal liberal-conservatism into a fully-fledged International Capitalist State.

Core issues drove the disengagement, but none more so than race. Those groups agin non-White immigration came to occupy the ignominious space hitherto inhabited by the Left. Now the Left was the parastate whereas against communism it had been the other way around. Where once upon a time the State used dirty tricks, show trials and shadow organisations to disrupt the Left’s activities while anchoring itself, now it employed those tactics against the Right. It needed to.

Both the Left and Right served the State’s social liberal core: intellectuals, feminists, and gays — the gamut of ‘progressive’ social movements — this New Right used satellite groups drawn from these to moderate resistance. Opposition arose from country folk, young unemployed, small business and others who became the losers in Australian Capitalism’s internationalization. Naturally, it was bound to happen, since this new social liberal State saw itself as part of Asia. It no longer sourced immigrants from Anglo-Celtic-European stock but the third world. A decisive process of de-Whitening driven by capitalism was underway. The danger to Asian investment had been realised. The extreme right was no longer an adjunct to Right-Wing Conservatism, but dangerous radicals.

The Left lost its identity in its co-option by capitalism and is now understood primarily for its anti-racist position, and the umbrella of social movements supported by capitalism.

The marketplace is colour blind, so it follows that capitalism is too. Companies and corporations are the first in line to support crank social movements: from adding pronoun options to their online registrations, to ‘inclusive’ policies of hiring, through to marketing and advertising.

When the ‘Punk Floyd’ riots initially gripped Minneapolis and negroes rampaged through liberal cities they trashed retail franchises and looted designer brand stores. How did big business respond? Far from pressing for prosecutions they pledged handsome donations to these ‘causes’ and offered other ‘rewards’ all gifted with heartfelt messages of solidarity. Meanwhile, the small businesses that were destroyed, nearly all black and minority-owned, were left disgusted and ashamed of their communities; a significant irony that these serpentine capitalist organisations ignored.

The ex-wife of Amazon founder Jeff Bezos personifies the social-liberal mentality of the capitalist. Bear in mind, she is supposedly on the opposite side of the fence dividing the socially conscientious Left from the self-interested bourgeoisie. But that’s an abstraction from another time. After finalising her divorce, MacKenzie Bezos became a billionaire. What did she do with the loot? She decided as her “pledge” to give it away to racial justice groups: the same ones currently funding the useful idiots ripping down statues, attacking federal buildings, and calling for police defunding. What a strange beast capitalism is, would you say, readers?

Of course, capitalists made their bones on the back of exploiting these ‘minorities’ that they so champion now. One could characterise the capitalist as that instigator who points at an innocent bystander when the mob bays for their blood and says, ‘THERE HE IS!” The contradictions, however, are buttressed by the logic of capitalism’s colour blindness, which bears no bias where consumption is concerned, so long as it occurs.

The relationship between the capitalist and anti-racist is one of exploitation to a common end but for differing reasons. Events in America will prove a preview of things to come. If Biden is elected (and there’s more chance of a rocking relieving itself) then Antifa and the anarchists will have done their job and will be expendable. If (or rather ‘when’) Trump is re-elected, well, that will be interesting times. However, something must give, not only for these groups such as Black Lives Matter which is being super-funded by capitalists but for international capitalism itself. Thanks to China’s Kung Flu, the script is being rewritten and none are more gobsmacked than the capitalists. Let’s see how much currency Anti-Racism continues to have when the obscurity of its purpose is rendered irrelevant.