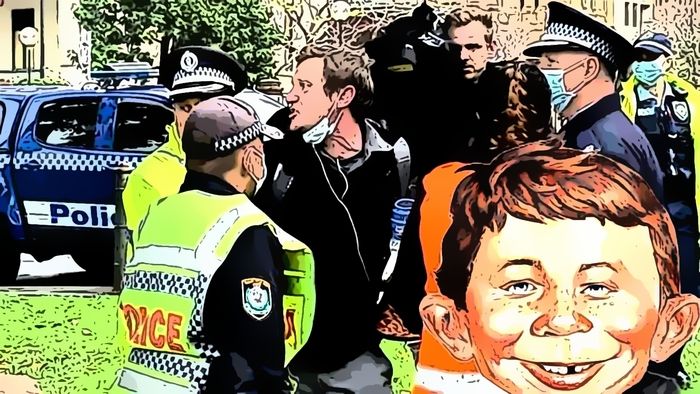 Organisers of Sydney’s second bogus Black Lives Matter protest were told not to rally but went ahead anyway with about 30 people tops.

As a result, Trotskyist organiser Paddy Gibson was dragged off by police, kicking, screaming, and wailing like a child being kidnapped. Even as he was loaded into a police van, he was hysterical, and not behaving at all like the heroic revolutionary he styles himself after.

Gibson was one of six arrested today amid the grey and drizzle of an apathetic Tuesday at Sydney’s domain where the bulk of Sydney did not have black lives on their mind. Perhaps it was a case of BLM fatigue, but the rotten turnout was a godsend for Sydney, which is still putting out Kung Flu spot-fires around the greater metropolitan area.

After all, they were ordered not to gather by the Supreme Court, a decision upheld by a last-minute petition to the Court of Appeal on Monday. God knows who’s been paying all the legal fees, we can bet Paddy’s bum chum Ian Rintoul hasn’t, being a tightwad who’s worth millions.

Rintoul is the clown from the Refugee Action Committee who advocates refugees live anywhere but on his expansive million-dollar properties. Both are leading figures in Solidarity, a Trotskyist organisation and member group of the International Socialist Tendency.

Just what that tendency is we’ve yet to find out, but we reckon it is connected to kiddie fiddling.

Hell, we hate cops, but it must’ve been a hell of a day to be dressed in blue. The joy began when rabble started illegally gathering at the Domain around midday. Things hadn’t even kicked off, and protesters were stretched sparsely across the field when a cop took to a megaphone to warn those present that they were breaching a Choo Flu public health order.

Frankly, though, he didn’t need the megaphone since there must have been about five protesters and the rest media. Wearing a facemask, Gibson started speaking after the officer. He addressed whoever wasn’t media, blurting out, “I would like it to be this family and the protest organisers who now work to…”

Some might suggest that he was addressing the crowd, but we reckon he was yelling at the cops hoping that if he shrieked like a woman their transgender-sensitivity training might kick-in and he would be afforded some leeway. But that’s not what happened and he was dragged off crying out “DISPERSE THE CROWD!”

When he was way out of their mitted hands, from way behind the jostling media protesters suddenly found their voice, chanting, “Let him go, let him go,” but it was far too feeble, and way too late.

Out of the other six arrested, three were men aged 40, 37 and 22, while two women, 50 and 23 were also arrested. But they weren’t hauled down to the police tombs, which would have been nice. Instead, they were issued with on-the-spot $1000 fines and move-on notices, while a 25-year-old woman copped a Criminal Infringement Notice for swearing. Some of them ripped up their fines in a show of epochal defiance.

As for panicky Gibson, after he settled down and had a nice hot cup of Earl Grey tea and a Kingston biscuit, he was given a $1000 fine and then sent out into the world having embarrassed the memory of Leon Trotsky.

The cops must have outnumbered the protesters by a million to one (fake news). Scenes in Sydney with masked cops on every corner, and gathered in a barricade across the Town Hall steps spoke of victory against the evil forces of communism using black lives as a way to slink into power. But all these commie parasites ever bring is death and disease.

Victoria is a communist state, with Chairman Dan dictating, which is why it is now under intense lockdown with people dying every three minutes (more fake news). It let the BLM rally go ahead and failed to enforce any public health order. In NSW, it was much harder for this Marxist-Leninist-Trotskyist conspiracy to have its way.

The organisers had offered to call off the demo if the Premier agreed to an investigation into the officers present during the death of David Dungay Jnr, who just happened to die while sedated in a mental unit of Long Bay jail after being taken there for his own protection when officers discovered the diabetic scoffing a whole pack of biscuits. But it seems the organisers had no hand to play.

And that, folks, is what it was all about — not the memory of some dead boong who is better off since life was too complicated for him. They wanted ‘hand’ for their own political ends.

The Trotskyites are using the Black Lives Matter movement as a cover. They’re not interested in black lives any more than any of them gives three squirts of lemon tea about anybody in particular. It’s about using the sensitivity relating to blacks as a cultural battering ram. It cannot be reasoned with.

That can be seen very much with what’s happening in the United States, which is right now on the verge of its second civil war.

You can say all you like about the reality of black deaths in custody, and how they’re not disproportionate; you can point out that black violence against Whites is endemic and not the other way round, and you can highlight the reality that is a black privilege in this twisted world we live in. You can satirise the warped logic of Woke till the cows come home, but none of them is listening. This isn’t about reason, it’s about force, and if you do not use force back at them, you’ll never win.