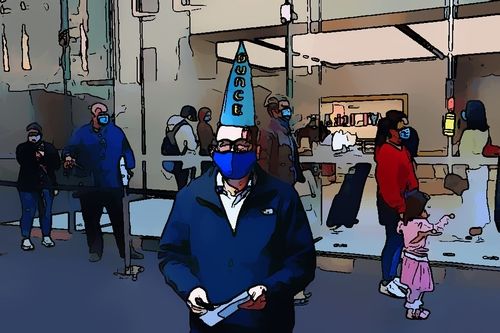 Living under stage three COVID-19 restrictions is boring, fortunately, it is the middle of winter and this year Melbourne is at it’s chilly best, so there is less incentive to be roaming about outside, but the grey southern metropolis has been rendered positively lifeless.

Melburnians intent on doing a shopping run or getting some exercise are waddling about in the now ubiquitous blue paper facemasks and huge, puffy winter coats, which seem to be the fashion this year.

Dogs are being walked to exhaustion just so their masters can get outdoors while vendors of overpriced hot beverages are doing a roaring trade as people sip milky coffee and wander about shuttered shopping precincts on their thrice daily constitutional.

The populace hangs on every word of the noon government press conference, with its expanding cohort of infected citizens and the steadily climbing rate of deaths among the aged and infirm; this must have been what it was like during the great wars, picking up the paper every day to read the casualty reports.

The premier, Daniel Andrews, normally a lively and enthusiastic sort of bloke, trundles out each lunchtime to break the bad news, his face ashen and his shoulders slumped. It even appears as though his normally poor posture has degenerated into a full-blown stoop since the revelation that the current wave of infection may be as a result of his government’s incompetence.

Mr Andrews and his band of corruption-stained suburban-political functionaries have let the side down when it comes to infection control, the most egregious mistake so far has been putting the hotel quarantine of returned travellers in the hands of private security firms.

Unlike the other states, who opted for military and police supervision of the plague palaces, the Victorian authorities awarded the contracts to reputable private security firms who then promptly sub-contracted much of the work to cowboy outfits.

The position of the private-sector security guard is possibly one of the lowliest occupations available in the contemporary labour market, even contract cleaners and food delivery riders are higher up the social ladder than the guys who watch over your local shopping centre.

These are the people, mostly foreigners or recent migrants, who are otherwise unemployable, who can’t even make it as cleaners or couriers; they are on the brink of being replaced by AI operated drones and remote control R2D2 lookalikes.

Yet knowing full well the calibre of human they were engaging and being aware of the corruption, underpayment and standover tactics rife in the private security sector the Victorian authorities decided to press ahead and leave this critical piece of pandemic infrastructure in the hands of blockheads and shysters.

When the first mutterings about misbehaviour by guards at the COVID hotels began to be heard I remarked to my work colleagues: “I bet they’re rooting the women in quarantine”. Mere days later I was sitting on the couch crowing to my family that I was indeed correct as lurid tales of sexual misconduct and incompetence emerged, as if leaving the system in the hands of young Lebanese, Indian and Islander men would have yielded any other result.

These boobs then carried the virus home to their families in the outer western and northern suburbs and behold, the second wave was born; one only wonders if an outbreak of venereal disease is to follow.

To be fair, the security guards were, it appears, poorly trained at best and at worst operating on false papers: whistle-blowers have said that they were not advised what they were getting into, merely told to report for work via text message and given a brief induction by nursing staff on arrival.

That doesn’t let Andrews off the hook though, the health department should have known what sort of workers they were engaging and insisted that the contractors provide the credentials of every guard on-site if the service was proving unsatisfactory steps should have been taken.

There are honest security operators and competent guards out there but it is clear that in their rush to respond to the COVID outbreak the authorities cut corners and we are now all paying the price.

Worse still, Andrews and his newly decorated police chief commissioner, Shane Patton, are guilt-tripping Victorians and blaming us for breaches of quarantine protocol with daily lists of the fines handed out to transgressors being published alongside the casualty figures.

This is starting to rub people the wrong way and Daniel Andrews is becoming a very unpopular figure, even pundits in the tame media are calling for the premier to hand over the daily press conference to the health bureaucrats as his negative attitude, scaremongering and disgraceful handling of the quarantine system are dragging down public morale.

The Wuhan virus makes its own rules, the current outbreak is mostly the government’s fault but every social interaction is akin to playing Russian roulette the vast majority of cases are currently listed as being of unknown origin, people are probably taking precautions and getting sick anyway.

The people have not failed, the system has, from top to bottom.

The immigration and work visa system are a failure, globalisation is a failure as is the move to a so-called “Gig Economy”; all of these are obvious factors in the Victorian COVID outbreak which threatens to drag down the whole country.

We could have gone to mandatory mask use in public months ago, except that we couldn’t, because the shops had been stripped of personal protective equipment by greedy daigou and agents of the Beijing communists.

The security operation in the quarantine hotels ought to have been straightforward if given to competent security companies, what we got was a mess staffed by clueless, untrained and financially exploited foreign workers.

This corrupt system of casual work is also at the root of the crisis in aged care, with the virus being spread by agency workers assigned to multiple homes in one working week, the likelihood of problems as a result of this transient workforce should have been obvious from the start.

Credentialism is also a major problem, customers might well demand that contractors supply the bona fides of each aged care worker or security guard being deployed to their premises but in the age of privatised education and training it is highly likely that workers will be presenting tickets from inferior vocational colleges or outright forgeries.

It is not that the state has a deficit of personnel to cope with any crisis, the problem is that we have a government working to a system which, by its very nature, rewards corruption and ineptitude.

Voices from the traditional unionist Left, as well as the Nationalist milieu have been pointing out the dangers of globalisation and the gig economy for a decade or more, but to no avail. The Left is battling against an imported mercenary workforce unwilling to show solidarity with their fellow workers and the Nationalists are dismissed as racist cranks.

Being right all along is small consolation though, the garden state is facing the spectre of level four restrictions if the caseload continues to build, a total shutdown of the most productive state in the federation will be a national calamity not seen since the grim days in 1942 when the Jap army was on our doorstep.