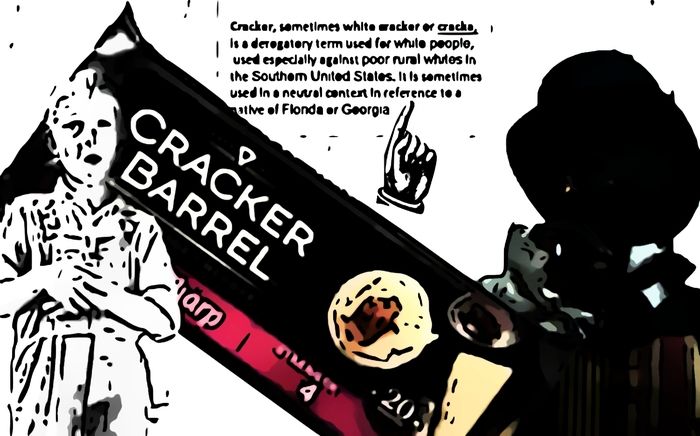 We fully support the decision by the Canadian owners of COON CHEESE to change the derogatory product name for the hurt and harm it has caused black people for almost a century. However, we must raise a cheese-related grievance of our own.

To whit — it honestly cheeses us off that the Kraft-owned cheese brand named Cracker Barrel continues to be stocked in the fridges of supermarkets the world over, containing as it does the anti-White slur ‘Cracker’. We demand that it be renamed immediately.

As such, over the coming weeks and months, New Australian Bulletin will be joining with Australian Nationalists in a campaign to have this offensive slur removed from the rich and bold cheddar, and renamed something less offensive to people who are not coloured.

We haven’t come up with replacement names yet, but some we’ve given a preliminary consideration is COOK BARREL, after the famous explorer Captain James Cook; WHITEY BARREL, in reference to the infamous Boston gangster Whitey Bulger; or BEDFORD BARREL, in honour of the American Civil War general, Nathan Bedford Forrest. We might have called it FORREST BARREL but the ‘B’ in Bedford provides a small alliteration. If that were the choice, we’d prefer it to be named BEDFORD’S BOLD BARREL.

We have chosen these options so that the world of cheese may acknowledge the contribution that white people have made to history, and even if Whitey wasn’t such an honest guy, you have to admit that he was an interesting homicidal maniac.

Yet, these options, as much as we would prefer them, are but wishful thinking at present.

As it stands, a trip to the supermarket or convenience store for sensitive White folk is fraught with the antagonism of facing down the Dairy Section. Just knowing that this brand will gawp out at us from the shelf deriding our skin colour, and reducing us to a contemptible racial stereotype, creates anxiety. No study has thus far been conducted into the psychological impact of offensive brand names, but you can guarantee that a huge and uncalculated statistic is quietly nursing the pain and injury inflicted by the makers of this otherwise tasty and satisfying cheese.

We cannot accept that the makers of CRACKER BARREL were unaware of the implied racial slur when they shook hands on its final name.

For that matter, we want to know who came up with the name CRACKERS, the savoury biscuit that compliments CRACKER BARREL cheese when served as light refreshments during dinner parties and other functions.

You cannot tell us that whoever coined the name wasn’t heavily involved in nascent Black Panther-style politics, or members of the Nation of Islam. If there is such a link, and we find any reference to relatives living or dead of Al Sharpton or even Spike Lee for that matter, we’ll be after them like a pit-bull onto a poodle.

New Australian Bulletin will be contacting Kraft directly and demanding they change the name of this brand. We will also be in contact with the Australian Human Rights Commission, and various media outlets. We intend to make this an issue that transcends nationality and we hope that ALL WHITE PEOPLE get behind our campaign.

Then, once again, we may be able to smile at family portrait time and when the photographer asks us to, we might “say cheese” without feeling alienated by the dairy industry.

As it is, we have to deal every day with the fact that milk is White, when it could easily be coloured.

Right now, a movie with the informal spelling “Cracka” is available on Amazon Prime and it depicts a world in which White people are enslaved and their masters whip them, probably while eating Cracker Barrel cheese on crackers.

We hope this complaint is taken as seriously as Dr Stephen Hagan’s, otherwise we might just make the prognosis that a certain privilege is at play in matters regarding race.

Now, that wouldn’t be right, not in an “inclusive world”, would it?