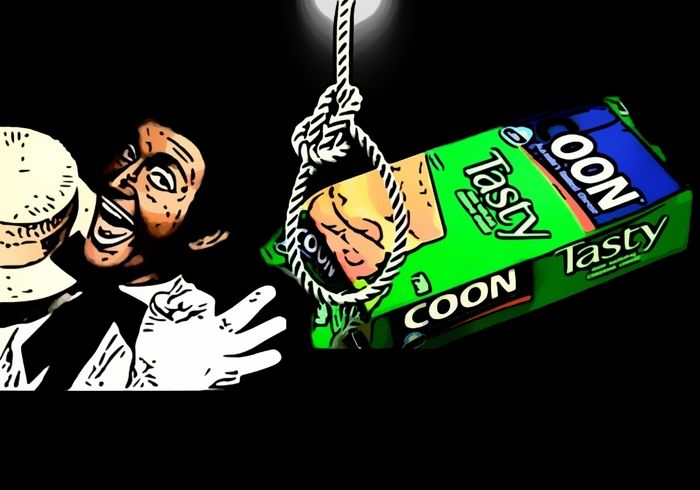 We applaud the Canadian owners of COON cheese for changing a name that is just an outright insult to niggers.

It was always about upsetting the jigaboos and the name of the man COON had nothing to do with it. If the original manufacturer was sincere about selling his cheese to everyone, especially the influential Negro market, he could’ve changed the name back then to something like Floyd Cheese ™. That would’ve been inclusive. But no. He had to name it COON.

Now, white supremacists are disingenuously arguing that because Edward William COON (who created the maturation process known as COONING) was actually named COON, it had nothing to do with COONS in regards to the racial epithet we find so offensive.

That’s a lie, and he knew it. It was always about hurting the feelings of jungle bunnies as are cruel words of hate such as BOOGEY, DARKIE, SHINE, NIGRA, PORCH MONKEY, SAMBO, SOOTY, SPADE, TAR BABY, BOOTLIPS, just to name a few. All of these names are intended to hurt and upset people who identify as COONS, and as such the name COON was only ever likely to become a race issue, whether or not we should be judging the cheese by the quality of its character and not the tendentiousness of its name.

Now the Nig-Nog who ran the 20-year campaign to change the name of COON cheese is an Abo by the name of Dr Stephen Hagan. He doesn’t like being called a COON, or a BOONG for that matter. That’s why he made changing the name COON his life’s work; his quest; his raison d’etre. It was his white whale, and in his regard, COON was the BLACK SHEEP among cheese brands. Thinking about it gave him the BLACK DOG.

He would rather buy unprocessed goat’s milk from the BLACK MARKET than handover the money he SLAVED over to a brand that taunted him from its packaging. No, sir, this was one dairy product that needed to be BLACKBALLED and the sooner the better.

Some might suggest Dr Hagan is an agitator, a busybody, a buttinsky, a bigmouth, a newsmonger, a fuss bucket, a gawper, and a PAIN IN THE ARSE. Back in 2008, Dr Hagan, who is an academic doctor and not a doctor of medicine, first chucked a wobbly over the brand name. In those days, he’d spent his time petitioning the United Nations over the E.S. “Nigger” Brown sports grandstand in Queensland. Again, NIGGER was an outright affront to all sensitive NIGRAS. He got his way and the name was changed to something less offensive to PAVEMENT GORILLAS.

Yet, Hagan, who had been in a DARK PLACE, felt an odd anticlimax. Something else needed placing on the BLACKLIST and the name COON CHEESE came into his sights. Hagan knew right off that the story behind COON CHEESE was one of mocking niggers like himself, so he set about a campaign to have the owners (both Dairy Farmers and KRAFT) change the name.

In 2008, he spelt out the singularly arrogant nature of his claim for discounting the legitimacy of naming the brand after its process creator. And that was because, unlike Dr Hagan who is a genius for being black and an academic DOCTOR, Edward Coon was an “uneducated Russian immigrant who worked as a factory hand and the patent was launched in his name 10 years after the cheese was being sold”. Now, if Hagan was to produce a brand of cheese like COON, he would be justified in having it named after him because he is, according to the title he has adopted, educated.

This is the grilling logic he used against reporters for the AAP back in 2008, when he said on the matter, “I want Dairy Farmers to show me the evidence of Edward Coon being honoured an honorary doctorate and what year he received that honorary doctorate.

“If they can prove to me that Edward Coon was the famous cheesemaker, I will drop my campaign. If they can’t do it, I’m going to fight them all the way, just like I did with Nigger Brown.”

Obviously, by DOCTOR Hagan’s logic, Henry Ford had no right to have a car named after him because he was a self-made man who didn’t hold an “honorary doctorate” like the incredibly intelligent and intellectually spectacular Stephen Hagan. Who happens to be both black AND educated!

Hagan is wondering where to go next with his life, since he feels strangely empty, having gotten what he wished for. Perhaps he might run a suit against the publishers of BLACK BEAUTY over its racist subtext in comparing a racehorse to a black person. More likely he’ll take a swing at SAMBOY CHIPS because take away the “y” and you’re left with SAMBO, which as well all know is offensive to niggers, too.

2 thoughts on “COON IS NOT A DIRTY WORD!”