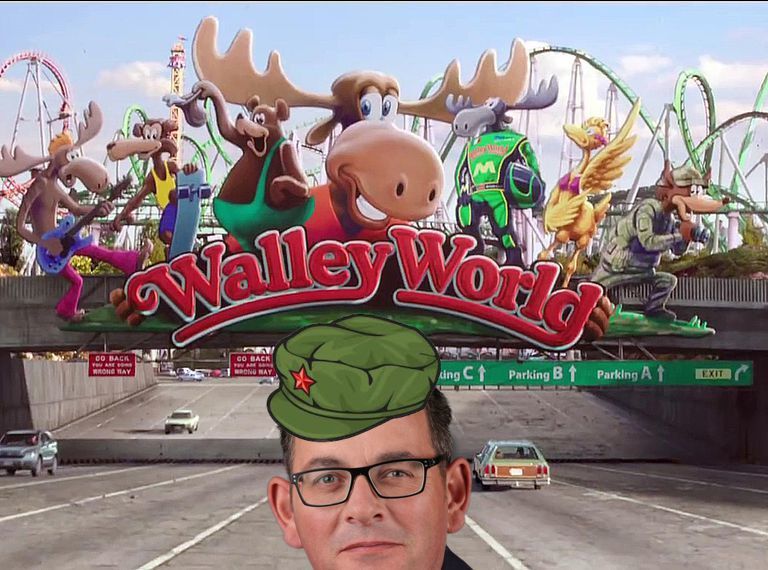 Daniel Andrews, Chairman of the Communist State of Victoria, is to consummate his state’s relationship with China’s Communist Party by availing itself of the $1.5 trillion Belt & Road Initiative.

This is despite the rest of the country and federal government backing a US-led proposal and EU motion for a “full independent inquiry” (remember Yes Minister-ED) into China’s cover-up of the spread of the deadly COVID-19 virus, also known as Kung Flu, or Bat Bug.

Big Ears wants to “boost the local economy” by tying it to the 2019 deal inked in a memorandum of understanding with Beijing but of which is yet to be exploited by the communist admirer. The way the Belt & Road works is that China loans a signatory country unfeasible sums of money for a basically useless “infrastructure project”, the country fails to pay back the loan, and then China owns a strategic piece of that country’s infrastructure by default. Simples.

Andrews, who has never held a job that any of us non-political class plebs would consider ‘real work’ is one of those examples of Labor Party intelligentsia that led it from being the party of the working class to a quasi-Marxist network of likeminded Maoist university post-grads.

Barely a month slides off the calendar without somebody connected to his cabinet evacuating on an aspect of Australian identity and tradition, as happened recently with Victoria’s Deputy Chief Health Officer.

Annaliese van Diemen waited for the commemoration of the Endeavour’s landing in Australia to unleash herself from the shackles of her portfolio and make a ‘controversial’ comment about Captain Cook. This bespectacled frump with greying yellow hair took to the perennial social media platform Twitter to express herself in the most obvious way possible.

“Sudden arrival of an invader from another land, decimating populations, creating terror,” the dullard Tweeted. “Forces the population to make enormous sacrifices & completely change how they live in order to survive. COVID-10 or Cook 1770.”

How clever, and how much approval she was likely to win from the upwardly Woke demographic that she — along with her treasonous party — stands for.

Naturally, all of this division comes as a delight to Beijing, which had all along embarked upon a program of infiltration and division. This is what it does. At a time when the dangers and lunacy of globalism have become starkly exposed to even the most ignorant, Beijing’s puppets are already pushing-in with a defence of China. It matters not to Andrews or the Nationals or oligarchs like Andrew “Twiggy” Forrest that the world has just been poisoned by China. Some of its defenders are motivated by the fervent belief that the only true God is money, while others are enthralled in a perverse kind by the power of China, and wish to subjugate not only themselves to its rule, but the rest of the country.

Speaking of Andrew Forrest, when we reported on his gate crashing a press conference by the federal health minister Greg Hunt in Melbourne where he pushed China’s Victorian Consul-General up on the podium so that he could proselytize on behalf of the communist state we had no way of knowing that Long Zhou was a Chinese spy. We should have known since at one time or another every Chinese person in public life was a spy for the regime. We’ll deduct 20 points from ourselves for not having predicted that.

Yet, we also failed to click when in early April a “mercy flight” from the Coronavirus infection capital Wuhan landed at Sydney airport. This landing came at the height of disgust over China’s cover-up and it was somehow apocryphally reported that the flight was carrying emergency medical supplies sent from China with love. Ho ho ho, if only. No, that wasn’t the case at all by a wide mile. The grubby little aircraft that was probably sprayed with a lacquer coverage of the virus to disseminate into our eco-system while passing through was carrying 11.298 tins of Viplus baby formula (originally supplied by daigou shoppers), and 35,000 kgs of Tasmanian Atlantic salmon. Ain’t that nice, they wanted to flog us our own salmon at an astronomical asking price. Also, for sale were 1 million face masks, protective gowns, and a whole lot of PPE that was “European certified.”

Note we said “for sale” and not being gifted. Having released the virus either deliberately, or most likely through bone incompetence, China now figures it’s created fantastic opportunities for business.

The government told them to hop it, they wouldn’t pay an astronomical VIG for an unsolicited cargo and sent them back to China. Australia’s ban on foreign flights had been breached with whispers but not incident which was, doubtless, the goal all along.

Nevertheless, it’s shocking to also report that Australia had a hand in creating the coronavirus, all-be-it unwittingly.

The CSIRO (Commonwealth Scientific and Industrial Research Organisation) had trained members of the Wuhan Institute of Virology team at its Animal Health Laboratory where, according to the Daily Telegraph, they “conducted foundational research on deadly pathogens in live bats, including SARS, as part of an ongoing partnership between the CSIRO and the Chinese Academy of Sciences.”

Evidently, they didn’t train them so well because a shock US report cited in that same DT article has revealed that the Wuhan labs were no cleaner than the typical Chinese Chew ‘n’ Spew that gets closed down by health & safety.

Peng Zhou trained at the CSIRO and is now head of the Bat Virus Infection and Immunity Project at the Wuhan Institute of Virology. Along with his mentor, Dr Shi Zhengli, Zhou and another, Dr Linfa Wang between them had studied the SARS virus and arranged for wild-caught bats to be transported to the facility — not to be eaten, mind — but to be scrutinised for their links to SARS and whatever antibodies might be detected and located. Apparently. They still insist on researching the flying rats despite potentially having unleashed on the world an end-of-days phenomenon.

Now, all if this is being done under the auspices of an unlikely egalitarian program to isolate and understand how these viruses travel from animals to humans. We reckon it (was) being done (and this is just our theory) so that China could create a pandemic from the virus and seal its patent on the vaccine, thus making it potentially scads of filthy lucre once it chose to release the Kung Flu through a clandestine program. If that’s not what happened then one of our writers will surely make that plot the basis of their first best-selling novel.

The incompetence of the running of the lab is coupled with the belligerence of the regime’s cover-up once terrified doctors began reporting on the irrefutable emergence of the virus. They went missing in the usual communist-style along with journalists, activists and scientists who, out of a natural commitment to truth, spoke up. They evidently hadn’t been vetted well by the party. But of all those, the most mysterious alluded to in the Daily Telegraph’s article was a researcher from the Wuhan lab at the centre of speculation about the true origins of the outbreak.

Huang Yan Ling is rumoured by the South China Morning Post (obviously a paper that doesn’t solely report what it’s told by Beijing) to have been the first to be diagnosed with Chop Fluey, making her the definitive “patient zero”. Apparently, since having caught the virus she was “disappeared”, with her biography and image removed from the institute’s website. Following that evidence was destroyed and the cover-up began and now here we are all in lockdown with some among Australia’s richest and most powerful wanting to defy truth and reason and not just placate the disgraced regime in Beijing but actively, like Daniel Andrews, tie us further to the empire of evil.

This may signal the madness in having Australia divided up into states in the first place. It’s a hangover from the days of colonial rule and what we need are blanket (nationalist) federal guidelines that would ensure creeps like Andrews could not undermine the security of the nation. Ideally, at the first indication of their treasonous instincts, they would be whisked away to a local version of one of those ‘re-education camps” they regard so highly.

But as we’ve said, Andrews isn’t alone, and it’s damned infuriating. Andrew Forrest aside, we saw recently how grovelling a corrupt council can be when under orders from the deputy PM and Nationals leader Michael McCormack, Wagga Wagga council was essentially commanded to rescind a motion passed to sever ties with sister city Kunming because money (for councillors) is more important than the ideological and physical health (not to mention freedom) of the nation.

And they aren’t alone; a most surprising (or perhaps not) development in this economic scare running through the big business sector is how demonstrably devoid of belief in its doctrine capitalism is. It’s business that would sign us up to control by China as quick as boiled asparagus because at the core of the capitalist belief system is the only thing worth believing in — money.

This is why KPMG Australia’s director of geopolitics Merriden Varrall has, in the manner of a perfectly corrupt advocate, supported Andrews’ quisling position on One Belt One Road.

Espousing two conflicting positions, security and economic interest, she told the Sydney Morning Herald it was in our interests to join the OBOR as a way out of the economic damage (which China caused in the first place-ED).

“We do want to have continued access to Chinese investment,” she said. “That is important for Australia’s economy and overall wellbeing.”

Ms Varrall has lost sight of the fact that the bat flu has in no way been either helpful for Australia’s economy or its overall wellbeing. But then, we are coming to a point where we must get passed notions of capitalism and a leading “economy” which benefits only the wealthy as the only viable system of Australian nationhood. It is not “health” of which they speak but “wealth” and not our wealth but theirs. That “wealth” has another name: “greed”.

In Andrews’ case, though, he is living out his ultimate fantasies that began when as a teenager he would run around the backyard of his parents’ home wearing a John Lennon cap and re-enacting the People’s Revolution.

3 thoughts on “VIC PREMIER DANIEL ANDREWS EAGER TO START BORROWING OFF CHINA IN ITS ONE BELT, ONE ROAD COMMITMENT”