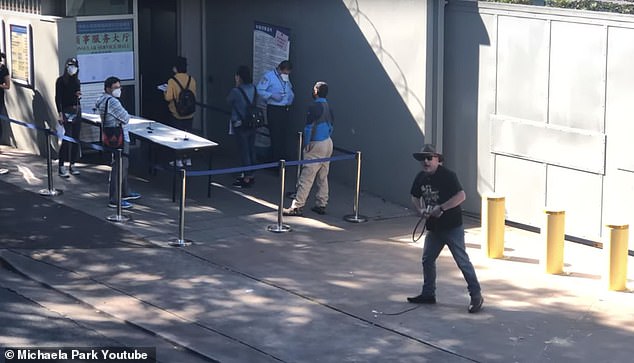 The Aussie hero who allegedly cracked a whip outside the Chinese consulate in a spontaneous protest against the Jinping Empire’s handling of the COVID-19 crisis last month has been arrested.

Police charged 55-year-old Dee Why man Raimond Kelly for supposedly threatening a group of predatory Chinese citizens lined up outside the Camperdown building where this veritable spies’ nest resides. The action is said to have taken place at around 10.30 am on Tuesday, March 31 and was reported by Mr Kelly on his Facebook page, where he righteously crowed, “I had a cracking good time at the Chinese Consulate today!”

The actual charges are ‘attempting to stalk or intimidate’, ‘intending to cause fear or harm’, and ‘being armed with intent to commit an indictable offence’.

Stalk or intimidate? Who, President Xi Jinping? Because that is the “politician” that the traitor press reported he “threatened” if you can believe that. And we at New Australian Bulletin totally believe it because Australia is only slightly more enlightened in a judicial sense than Communist China which, in some ways, is even ahead of us in terms of truth and justice.

You would certainly think so if you read the keywords used by the Daily Telegraph and the Daily Mail while reporting on this plucky Aussie bloke. They use the reproachful language of moral judgement, which, in this environment understood by all true Australians to have been caused by China, is a betrayal of the very people they profit off of.

“Racist attack” the DM called it, “racist tirade” it objected, and had all but convicted him ahead of time because that is the kind of media we have: deceitful, treasonous, and anti-White.

The truth is that Mr Kelly is a champion who is one of the very few with the guts to stand up to the Chinese. One might not even know where to start but he figured out pretty quickly that the Chinese consulate is the place to express not only his own feelings but the opinion of all truly native and loyal Australian folk.

We condemn the treacherous NSW Police for arresting this hero and accuse of them a bias towards the enemy. We do not use such language to be amusing, but our country has been plunged into economic ruin because of the Chinese, a fact that only internal enemies such as Lebanese Labor MP Shaoquett Moselmane or Sam Dastyari would argue with.

While allegedly wielding the cracker, Mr Kelly is said to have provided a commentary aimed at the consulate’s visitors and which was captured on video by persons unknown. He is quoted as having goaded, “I’ll put a bullet in the General Secretary’s head. I’m going to kill that leader of China.

“Filthy fucking commies! Trying to take over the world. No more,” and “Death to communism! Wake up Australia! Wake up! No more shit from China!”

He also accused those Chinese within earshot of “deliberately” spreading the Kung Flu virus.

All of this is absolutely correct, and instead of our perfidious police force arresting Mr Kelly, a man with a legendary Australian surname, they should be honouring him with a golden bullwhip. We certainly would if we had the coin. But this is what to expect as the surveillance state presses harder and criticism of China becomes an arrestable offence.

Because who do you think the government plans to sell off to when the bill becomes due for the stimulus program. China’s already flying agents over here to size up our assets for the big markdown sale. And then the Australian government will become little more than minions of the Jinping Empire.