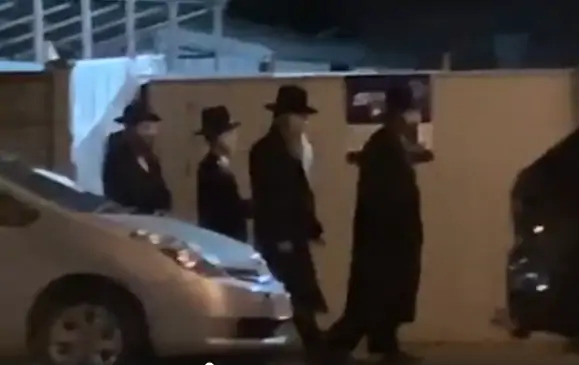 A community of ultra-orthodox Jews in Melbourne are being criticised for flagrantly contravening emergency regulations governing mass gatherings in the wake of the COVID-19 outbreak. However, none have been arrested.

Video has emerged of as many as 50 Jews coming and going from a makeshift synagogue at a residential property at Glen Eira Road in St Kilda East on Wednesday night — despite a total closure of places of worship. The federal government rulings are part of the drastic Stage 2 Restrictions announced the night before at a meeting of the National Cabinet. The bans are intended to contain the virus and stop it being transmitted through large gatherings.

However, the ultra-orthodox Jewish community in Melbourne do not believe the rules apply to them, and have flouted the crisis measures by gathering in the backyard of the suburban home which was set up with floodlights.

The Jews are said to be engaging in the rotation of a prayer ritual called a ‘minyan’, which is held with a gathering of ten men at a time.

Locals who spoke to The Australian expressed their dismay that frantic calls made to police had been ignored. One said, “There must have been about 50 people who came and went over the hour.”

The man, who identified himself as Jewish, said, “I’m absolutely furious they’re behaving like this, putting the lives of the entire Melbourne community and beyond at risk.”

He added, “We called the police three times and they never came.”

Another reported how a white sheet had been set up in the property’s courtyard, in front of a floodlight. “They don’t care. It’s terrible because they go to the shop and the supermarket and they spread it,” she said. “We’re disgusted in the police for not attending to it.”

Victoria police evaded questions from The Australian. Instead, a spokesman gave a perfunctory statement saying, “Victoria Police is not going to be providing comment on individual spot checks or reports of people breaching self-isolation.”

Of course, they would have a hell of a lot to say if those breaking the ban were not African, Chinese or Jewish.

Manny has actually been hypercritical of the ultra-orthodox Jewish community, having suffered at the hands of sleazy rabbis when a student at the reclusive Yeshiva College in Melbourne.

Like his father, he became a pariah in the Jewish community for his activism against the supremacist set. This put both him and the old man at loggerheads with Avi who became a junkie for a while and reinvented himself as an anti-Islam crusader.