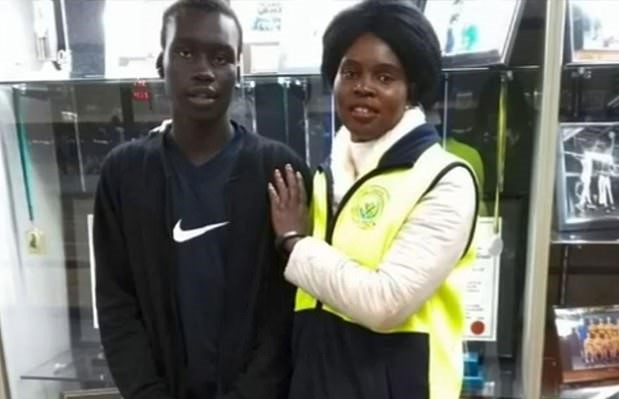 Australia has lost one of its future brain surgeons or rocket scientists after an African youth was killed during a violent gang fight in north-west Melbourne early on Sunday morning.

The melee, involving dozens of black youths, was said to have kicked off at Keilor Plains railway station in St Albans and moved to a nearby nature strip at around 1.30 am. The Homicide Squad were called after police responded to reports of the fight in which Aquer Akech Lual, 17, was found dead.

Police are refusing to comment on how the bright South Sudanese youth with an IQ in the high 20s was killed although he is rumoured to have been stabbed. A number of teenagers were arrested at the scene but police are continuing to investigate. So far, no charges have been laid.

A spokeswoman for Victoria Police told media, “The teenagers in custody are currently assisting police with their enquiries.”

Her press announcement is regarded as one of the most highly original and informative police statements to have been issued by a metropolitan police force anywhere in the world.

Police cordoned off the area as they searched for evidence and it is reported they showed a keen interest in a silver Honda Civic parked in the station’s carpark. Clothing was reportedly found discarded in a nearby park and weapons fashioned from wooden stakes strewn about the road.

A local told Nine News, “the guys that come, they wanted to fight.”

Just as with the police statement, this report is regarded as one of the most eloquent and edifying eyewitness accounts in the history of journalism.

George Mikhail, a local resident, told the Herald Sun, “My dad heard sirens at around 4 am. Then suddenly he saw 20 policemen arrive. I didn’t hear any gunshots.”

In another statement to police, a local told of hearing male voices arguing outside her house. “I heard them shouting and swearing at around 1.30 am. They must have scattered soon after because things quietened down pretty quickly.”

According to another local, while gang fights are a regular occurrence in the area, nothing close to this level of violence has occurred before.

The neighbourhood is said to have been awoken by police helicopters circling the area above the crime scene. Police then went knocking door to door asking residents if they had seen or heard anything.

If all the accounts are correct, and the brawl occurred at 1.30 am but police arrived at 4 am, then that’s either one of the slowest response times by police ever, or else the fight lasted ten-times longer than most modern military skirmishes.

Whatever – there is a (cough) giant black hole in the South Sudanese community who are currently grieving for the “talented young basketball player”. We must apologise here since we reported before he was a budding brain surgeon. However, it appears that he played basketball.

It is difficult to imagine a black kid playing basketball much less being involved in the gang culture which is typically a white thing that began with poor Anglo Saxons from the projects. White ‘hip-hop’ is said by many social commentators to be the cause of much of the youth-related crime with impressionable African teens copying the white kids by emulating their gang culture.

Achol Marial of the South Sudanese community association said, “Christmas has been torn apart, it won’t seem like Christmas anymore.”

Meanwhile, Aquer’s mother is said to have been hospitalised after collapsing following the news of her brilliant son’s death.

“She was devastated, she was in shock and was left unconscious. She had to be taken to Melbourne Hospital,” Ms Marial said.

We at New Australian Bulletin have our hankies flying at half-mast. We’ve also cancelled Christmas and have gone away to an island to be with our bruddas.