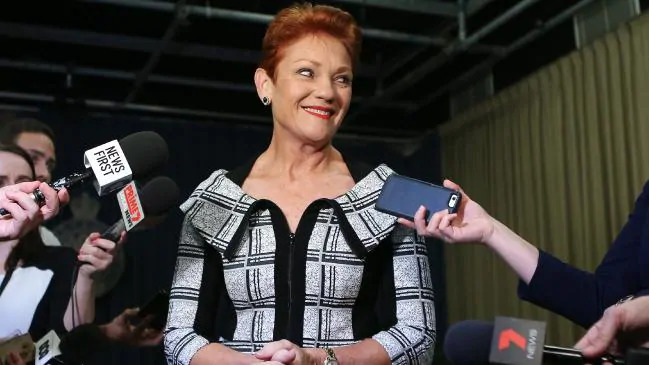 Nationalists have argued themselves hoarse over the matter of Pauline Hanson as being a 100% genuine fake.

We’ve pointed out everything this money-grabbing liar has done to jump on opportunities and then stick it to nationalists when it suits her. Never forget her condemnation of Fraser Anning as “racist” before tabling a senate motion that it’s “OK to be white” to cash-in after realising she’d made a boo-boo.

We’re not even sure she is white the way she otherwise recruits legions of Chinese members in WA who will no doubt turn out to be Beijing infiltrators or exploiting picaninnies with the slogan ‘you don’t have to be White (to vote One Nation)’. She had a curry run as a candidate once.

Nor should it be forgotten that she also betrayed her working-class demographic and her race by arguing in favour of her oligarch mate Gina Rinehart’s deal with Chinese consortium Shanghai-Cred for the purchase of Kidman Cattle Station. She told her viewers, “I’ve spoken to Gina, and there are no communists”. Heh, smart lady.

Now Pauline has just put about another thousand light-years between herself and her key demographic by toppling the government’s union-busting industrial relations bill by voting against it.

Don’t get us wrong, screw the coalition, that’s not the point — the CFMEU doesn’t stand for Australian workers, they are a dangerous mafia of leftist extremists who can be linked to the worst of the worst.

According to The Australian, Hanson held meetings with Chris Brodsky, the CFMEU’s Queensland construction division organiser. By all accounts, Brodsky is a disgusting grub who superbly personifies the thuggish character of the CFMEU which terrorises small businesses and contractors with seeming impunity, not to mention any political opponents, but we’ll get to that.

The bill in question was designed to enable the deregistering of lawless unions (in other words, the CFMEU) and their meathead officials. Now, we’re not in support of anything that would hand a conservative government the power to shut down workers and their right to lawfully assemble and protect their rights and working conditions. However, the CFMEU is a step beyond, and again, we only support those unions who stand for Australian unity, not unity with aliens come to steal Australian jobs.

Having said, just about any activity undertaken by a serious union genuinely standing for workers’ rights would be deemed by such a government as being “lawless” so obviously the government and the CFMEU are two halves of the same problem as far as we’re concerned.

However, Pauline evidently has a streak of red in her brighter than her hair, because she gave the government verbal assurances of her support before her and Malcolm Roberts’ sudden 11th-hour flip in favour of the red-raggers at the CFMEU.

The CFMEU has been actively involved in attacks upon nationalists for years — and that is true nationalists whose business is the honest manifestation of politics that Hanson and her ilk only play at.

When nationalists from the Australia First Party and other groups assembled in Brisbane in 2014 to support imprisoned members of Greek nationalist party Golden Dawn the far-left tipped off the CFMEU who rolled up in force.

The rally disintegrated into a near brawl, and afterwards, when nationalists were refreshing themselves at a city pub, members of the CFMEU crashed the venue and assaulted rallygoers. One of those hospitalised was an elderly man, which shows how low these goons are.

Then there is the case of CFMEU thug, the bisexual freak, David Gullis who Newtown Police refused to arrest.

In December 2017, Gullis was caught on CCTV attacking the former residence of Sykes. Despite the images and the fact that three other complaints of assaults had been registered with their station against the gormless brute, Newtown Police refused to pursue him. Moreover, it took a social media campaign for Sykes to even identify Gullis as the antagonist. At the time, he even approached One Nation’s NSW party leader Mark Latham asking for help in determining who his assailant was. Latham, at the time, was posing as a quasi-nationalist with his social media program, Mark Latham’s Outsiders. But Latham blankly ignored him.

Sykes approached the CFMEU challenging them to name their man since he was wearing one of their hats in a pic, but they denied any knowledge of him. Yet, it turned out Gullis was not only a rank-and-file member of the CFMEU, but he linked to its underground networks such as The Communist Workers Party, the Australian Communist Party, and Antifascist Action.

This came to nothing in the end, and a ditzy magistrate told Sykes that it was his job to locate the lumpen. She actually said, “It’s not the job of Newtown Police to act as your detective” a comment that has surprised more than one lawyer that Sykes has spoken to.

This is who Pauline Hanson is supporting by siding with the CFMEU; the muscle end of anti-fascist action.

It is incumbent on anybody who knows of a One Nation member who is worthy of better treatment to let them know immediately what Hanson is, what she has done, and what she continues to do on their quid.

But nationalists learned long ago, the line between the far-left, and the far-right to which Hanson belongs is very thin indeed.

MATILDAS TAKE A KNEE AND POSE WITH ABO FLAG AT TOKYO