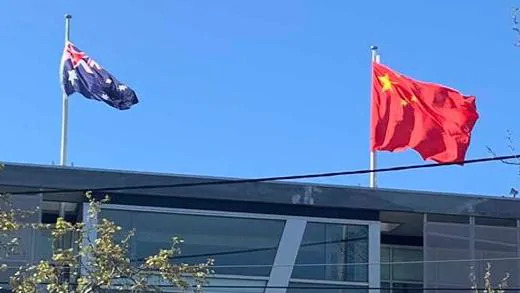 A group of nationalists will be the first Australians to protest Box Hill Police Station in Victoria following their shameless flying of the Communist Chinese flag on the 70th anniversary of that totalitarian state.

NAB has been asked to help publicise this event, and as with all truly nationalist engagements, we are more than happy to oblige.

We were the first nationalist media to publicise this story (thank you, thank you) as we were the first (and only) to coordinate the only protest against China’s military invasion of Sydney Harbour in June.

Australian nationalists, particularly the Australia First Party, have been the only nationalist organisation to maintain its vigilant anti-China activism. This tradition dates right back to the beginning of nationalism in this country, but more so, during the 1980s when National Action spearheaded the opposition to the seeping Sino dragon. This made NA a lot of enemies in high places.

Of recent times, Australia First Party found itself isolated in its sounding of the alarm about China. It simply was not fashionable for pseudo-patriots such as the ramshackle United Patriots Front, Reclaim Australia and others, who mocked nationalists for emphasising the threat of China over Islam.

Now, the threat is all too real, and once again it is fair dinkum nativists taking the loudhailer to the Sino-quislings.

Susan Jakobi, who led the most remarkable performance of any nationalist candidate at the recent federal election, breaking the 4% ceiling for the AFP, will be the speaker at this event.

She told us, “It is unbelievable what is happening in Victoria. It was unforgivable that (Vic Premier) Daniel Andrews actually apologised to the Chinese for anti-Chinese sentiment during the gold rush.

“But he is so eager to sell us out to this monster he not only signed a memorandum of understanding to hitch Victoria to the One Belt, One Road initiative, he is clearly pulling strings to make the state as ready as possible for the influx of untold Chinese.

“Box Hill’s raising of the communist flag not only indicates the kind of political control Victorians live under but is in-your-face proof of how the Chinese can now expect their own special police force. This is outright treason.”

We urge all genuine, peace-loving patriots to join Sue at Box Hill Police Station on Saturday the 12th at 1 pm.

Whether ten show-up or a hundred, what matters is that Australians start pushing back. A small gathering today may be a mass movement tomorrow.

NAB will be reporting on the protest.