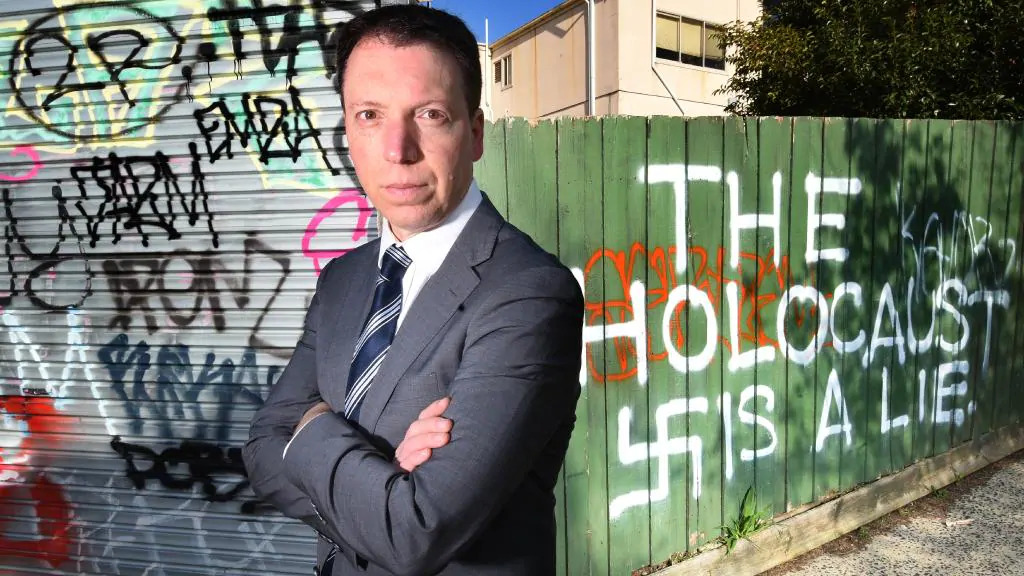 What is it with Zionist public nuisance cases like Australian Anti-Defamation Commission chair Dr Dvir Abramovich?

It is possible that he has a few screws loose, though aside from his overt paranoia, he doesn’t present as the kind of Loony Toon serial pest we are accustomed to.

He is as much of a pain in the arse as a paid provocateur like Neil Erikson, or Avi Yemini and his views are just as problematic for real Australians as Clementine Ford yet the media uncritically accept his bug-eyed, fear-mongering editorials for national distribution.

This time around we have two of the most ridiculous cases of alleged anti-Semitic bullying in recent memory; as usual, the tall tales of suburban Jewish oppression are uncorroborated, and as is typical for the ADC, hazy on details.

The first is the apparent depiction of a 12-year-old Jewish boy being forced to kiss the shoes of a Muslim classmate in an alleged act of bastardry carried out in a Cheltenham park outside school hours.

The second is a vague tale about a much younger boy being bullied by his five-year-old peers at school in Hawthorn; they allegedly called him a “Jewish cockroach” and “vermin” while mocking his circumcised genitals.

Dr Abramovich and his predecessors in the Anti-Defamation Commission have cried wolf so many times over the years that every utterance from the Bnai Brith on the subject of “hate” is now greeted with groans and eye-rolling by the community at large and, just as in previous cases these outrages will quietly disappear without further scrutiny once they have dropped off the top stories sections of the news websites.

Apart from publicity for their educational programmes it is never clear as to what, if anything, the ADC hope to gain from these promoting these extremely dodgy scandals; Dvir Abramovich is wholly motivated by the Zionist agenda so let me take a stab at what he may really hope to get out of his constant pot-stirring and drama.

The Jewish community in Australia does indeed face some pretty serious challenges, though bullying and racism are way down on the list; there has been reasonable speculation by senior Jewish figures, such as Rabbi James Kennard, as to whether Jewry has much of a future at all in this country.

The issues are all to do with demographics and the rate of intermarriage by young Jews; older Jews are dying off and the out-marriage rate is over 40%. These young families are having fewer children than past generations and are raising them in secular homes with public education.

This, as you may have gathered, has a profoundly negative impact on the viability of private Jewish day schools and religious education since the smaller the school population the more expensive it is for everyone; fees go up and working-class families are forced to send their kids to the local state schools.

Fewer kids in Jewish schools also means it is harder to push political Zionism onto impressionable minds and the ‘ghetto” mindset of us-versus-them which has historically underpinned community cohesion in the diaspora is harder to maintain when young Jews are out mixing with a range of people and being exposed to all points of view.

Any wonder the ADC is focused on making public schools “safer” for Jewish kids and shoring-up financial support for the private religious education sector, Dvir Abramovich calls for mandatory Holocaust education and anti-bias training in schools as if that would somehow pull the bullies into line, it is a hopeless task for two reasons.

Firstly, the case at hand involving the supposedly Muslim aggressors, if found to be true, points to factors outside our control anyway; fallout from the Arab-Israeli conflict is impossible for Australians to mitigate as it is driven by events distant in space and time from our own reality.

The other problems facing the Jewish community in the present year are almost wholly internal, as we have discussed, so global solutions and finger-pointing are a waste of time.

Furthermore aggravating Zionist race-baiters like Dr Abramovich with his outlandish behaviour don’t help one bit, this kind of buffoonery might have been able to scare elderly Holocaust survivors and second world war veterans who bought into the anti-Fascist propaganda but it has no hope of succeeding today, the world has moved on and so it seems has the new generations of Jews.

One thought on “DVIR ABRAMOVICH PLEASE SHUT UP!”