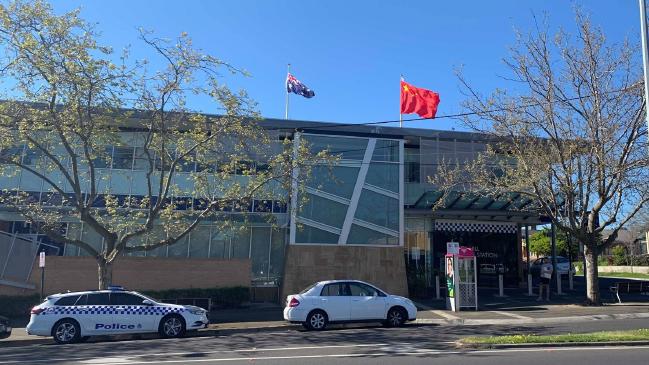 A Victorian Police Station has inexplicably flown the Chinese flag beside the Australian flag during the 70th anniversary of the Communist dictatorship drawing puzzlement and concern.

On Tuesday, Box Hill Police Station flew the red and gold-star flag, despite the fact that it symbolises a new era of totalitarianism, repression, and Chinese imperialism that threatens the security of the Australian nation.

Local residents were baffled and alarmed by the move especially since a video showing the Chinese anthem being sung accompanied the raising of the tyrannical red flag.

Victoria’s pro-communist Police Commissioner, Graham Ashton, who rules Victoria like a Politburo chief staunchly defended the decision. He told ABC radio that the ‘ceremony’ was held in respect of China’s national day and to welcome that country’s New Year festival.

But he played dumb when it came to the anthem, even though he would have personally signed off on the ceremony, claiming, “I haven’t heard about the anthem. I don’t know whether that was played. But certainly, the flag was flown, and it’s been the last few years, I think, at the local station.”

Ashton, who should be tried for treason, went on to explain this act of subversion by invoking the multiracial narrative, saying, “They’ve [Box Hill] got a good relationship with the local Chinese business community and they’ve been working in collaboration with the local council about the build-up for Chinese New Year and the kick-off celebration, and the Chinese national day.”

Now, forgive us, but we presupposed (and wrongly) that this being Australia means we celebrate New Year on the First of January. Moreover, we celebrate Australia Day, not China Day, but apparently with the kotowing to China — of which the quisling state of Victoria leads the way — this is just a silly, quaint notion.

Victoria was the first state to sign up to China’s world-conquest programme the One Belt, One Road mission, quicker than you could call out, “Fried Rice!”

In 2017, Victoria’s practising communist premier, Daniel Andrews, was moved to apologise to the Chinese community for the treatment of their invaders during the gold-rush era, a troubling decision that simply demonstrates his dedication to appeasing a foreign power.

Nonetheless, Box Hill’s local rag the Whitehorse Leader told The Australian that locals were “very uncomfortable” about the station flying the communist flag.

One reader, Keith Wilkins, a Box Hill resident said that it was disturbing that the flag was flown and he and other residents believed it inappropriate.

He told The Australian, “People are quite uncomfortable. What’s the purpose? It needs to be understood what they’re trying to do.”

A superintendent representing the Box Hill district blathered a statement about “working closely with the Chinese business community” which is a sentence that is meant to sound like it means something.

By “working closely” do they mean that they’ve enlisted the local Foodworks owner into surveillance operations, or do they help load fridges?

Or perhaps it means they get free Tom Yum soup and dim sims from the local gook chew’n’spew.

Oh, and it just so happens that the station sits in the electorate of the Liberal’s Chinese spy MP Gladys Liu, who has about a million links to communist China, which she works for.