WAGGA WORKER SACKED FOR NOT BEING CHINESE 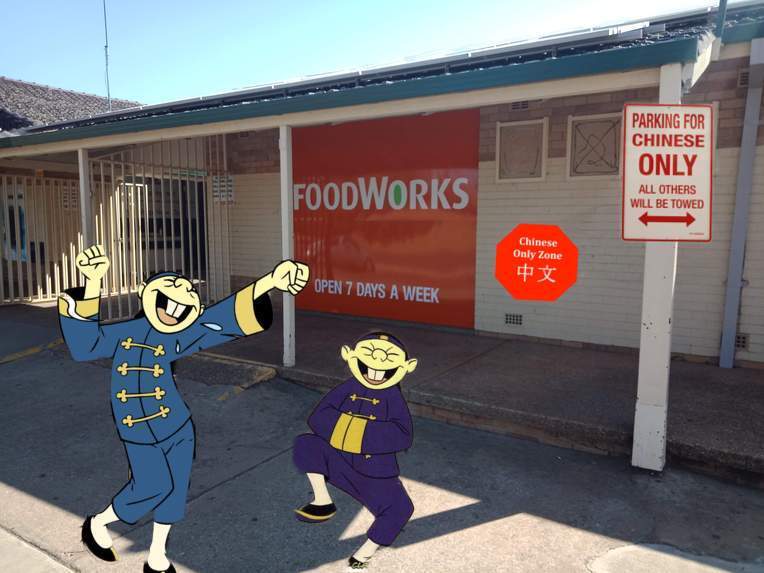 A 66-year-old female worker in the NSW town of Wagga Wagga was sacked from a Foodworks franchise because the store’s new owner only wanted to hire Chinese.

This week the Fair Work Commission said that store owner Jianbin “Eddie” Wang had been “grossly unfair” in his treatment of native employee Gail Ayton who had worked at the store for more than 20 years.

According to The Australian, the commission agreed that the Australian woman’s treatment by the Chinaman amounted to a breach of anti-discrimination laws.

Ms Ayton told the commission that Wang had been trying to get rid of her ever since he bought the store in 2016.

In the execution of its investigation, commission deputy president Peter Sams trawled the internet and found “a number of past job advertisements by Mr Wang on various Chinese Australian job forums”. According to these posts, the requirements were listed as “Asian Lady preferred” and “Asian staff preferred”. In a wonderful passage of commendable Engrish (sic), he also wrote: “more prefer oversea people”.

Ms Ayton found out that she was sacked when she received a text message in April this year, in which Wang cited such bogus excuses as absences from work and minor cash shortages ranging from $5.10 to $30 missing from the till.

Mr Sams slammed these reasons as weak and lacking evidence. In fact, Ms Ayton had taken only one day off in three years, and the cash shortages were typical of small business and the amounts negligible.

Mr Ayton’s dismissal was, he said, “not, in truth, related to her conduct or performance.”

“In my view, supported by the job advertisements posts by Mr Wang, the respondent’s real motive for dismissing her was Mr Wang’s preference to hire staff of Asian-speaking backgrounds,” he said. “I am bound to observe that, prima facie, Mr Wang’s conduct constituted a breach of anti-discrimination laws and/or the applicant’s dismissal was for an unlawful reason, pursuant to s 772(f) of the (Fair Work) Act.”

However, he also found that there was no point in ordering a reinstatement given the “appalling” treatment of the Australian worker by the Chinese store owner.

The commissioner is considering whether to refer Mr Wang’s conduct and file to the commission general manager for its possible breaches of anti-discrimination and industrial relations legislation. He also recommended Wang be referred to other agencies to investigate whether or not he breached state or commonwealth law.

In his summing up, he said that Ms Ayton was totally blindsided by Wang’s accusation and given no right of reply.

“In my view, the respondent adopted a hopelessly unfair and biased process to dismiss the applicant, whereby Mr Wang ‘waited’ for an opportunity, which he believed would justify terminating the employment of the applicant.

“He was mistaken … the respondent’s complete disregard in affording the applicant any natural justice when dismissing her was astounding for its brazen and appallingly perfunctory unfairness.”

However, this is but the tip of the iceberg. As journalists for The Australian and The Age urge us closer to China citing “jobs” as a key justification for our Asianisation they fail to mention those jobs are for the masses of Chinese taking over.

One only has to walk into an average shopping area to find a workplace Balkans in existence, with Indians hiring only Indians, Nepalese hire Nepalese, Asians only Asians.

It’s ironic that these laws, which were designed to intimidate Australians into assimilating better with the takeover population of non-white migrants, are now being used against the audacious invader.

One thought on “WAGGA WORKER SACKED FOR NOT BEING CHINESE”