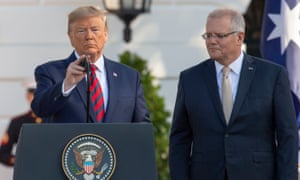 Australia’s ultra-Zionist Prime Minister Scott Morrison has just paid homage to Israel’s best friend, Donald Trump, during a tour of the US where he was a special guest at the White House.

What’s the rub, you ask; what favour is likely to be asked of our middling nation? Well, that’s easy, what is it ever? It’s a war.

Australia is expected to hop aboard the war wagon, even though we never get anything in return for these militaristic adventures we slavishly join. Yes, our servicemen are being signed up for another Zionist war, this time against Iran.

It was a direct echo of 2001, when that other Zionist shill PM of ours, little Johnny Howard, joined the ‘coalition of the willing’ and became George W. Bush’s best mate. That led to Australian forces joining the initial ‘execute’ order in 2003 when they partook in the disarmament of Iraq and were redeployed there in 2005.

The pretext for this illegal invasion was that Saddam Hussein supposedly possessed weapons of mass destruction. But none were found. Oops. Still, the operation went ahead, partly as retaliation for 911 (against the wrong country), but mainly to enact the neo-cons’ masterplan. Their strategy was to create perpetual conflict in the middle east by pitting Sunni against Shiite as a means of ensuring the survival of Israel.

America is a satellite state of Israel, not the other way around. Since Israel’s creation in 1946 till now, the US has spent $228.7 billion on mostly military aid to Israel. It continues to prop up a country that is ranked 16th highest in the world in terms of living standards, especially compared to other countries in the middle east.

It’s ironic considering the average American’s detestation of Medicare that their taxes go to supporting a mandatory public health system in Israel. It was estimated a while ago that America invested a yearly sum of $16,000 per each Israeli citizen. That’s money they would never waste on an American in a pink fit unless they were black, brown or yellow.

Wars with Israel have led to the mass displacement of Arabs of one kind or another, who invariably end up as refugees in white nations. Israel cannot be expected to practise what it preaches and has a zero-tolerance policy towards refugees if there is any hint of them being expected to settle there. Yet, if white nations object, Israel’s mouthpieces are the first to cry aloud about racism and commitments to the United Nation’s refugee program.

White countries must take these refugees because that is part of a program that is co-dependent on refugees being imported: the abolition of the history and traditions of white countries. If the international Zionist is to travel freely about the globe then it’s important that he is able to move unimpeded through de-nationalised zones, in a diverse environment more ready to accommodate him, and more willing to punish his enemies.

This is all a huge sacrifice for a tiny state and it is in the GOP of the Republicans where support for Israel is highest, even though ‘the system’ ensures that even a rabid pro-Palestinian president would have no choice but to get with the program.

This support is all tied up with the religious complexities of the evangelical brand of Christian which shares a vision of the Jews as ‘God’s chosen people’. It is in the name of this insane religion that Australians will be expected to shed their lives and take the lives of others.

But what is Israel to us? By being beholden to the United States, in a one-way deal which gives us nothing but grief in return, are we really expected to call Israel our master too?

Israel is not our master, and we will not serve its devilish purposes. We are not a pawn to be used by religious bigots and murderous regimes. When Australians fight it shall be only in the defence of Australia against aggressors like the US and China.

Until then, we are not Israel’s slave, and we must not allow the gangsters in New York to decide the fate of our citizens.