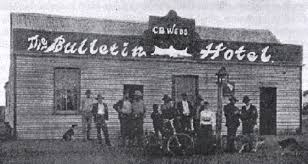 I was drifting in the drizzle past the Cecil in the Strand
Which, I’m told is very tony – and its front looks very grand
And somehow fell a-thinking of a pub I know so well
Of a place in West Australia called The Bulletin Hotel

Just a little six-room shanty built of corrugated tin
And all around blazing desert – land of camels, thirst and sin
And the landlord is “the spider” – Western diggers know him well
Charlie Webb – Ah, there you have it! – of the Bulletin Hotel

But the swagman, on his uppers, pulls an undertakers mug
And he leans across the counter and he breathes in Charlie’s lug
Tale of thirst and of misfortune. Charlie knows it, and – ah, well!
But it’s very bad for business at The Bulletin Hotel

“What’s a drink or two?” says Charlie, “and you can’t refuse a feed”
But there many a drink unpaid for, many sticks of borrowed weed
And the poor old spineless bummer and the broken-hearted swell
knows that they are sure of tucker at The Bulletin Hotel

There’s the liquor and the licence and the “carriage” and the rent
And the sea or grave ‘twixt Charlie and the fivers he had lent
And I’m forced to think in sorrow, for I know the country well
That the end will be the bailiff in The Bulletin Hotel

But there’s lots of graft between us, there are many miles of sea
So, if you should drop on Charlie, just shake hands with him for me
Say I think the bush less lonely than the great town where I dwell
And – grander than the Cecil is The Bulletin Hotel