REVENGE OF THE LONG-TERM UNEMPLOYED

DON’T BE CONNED BY CONSERVATIVES

HOW CAN SCOMO SWIM WHILE OUR HOMES ARE BURNING?

CONSERVATIVES CLAIM NATIONALISM IS ANOTHER NAME FOR DEMOCRATIC PRIDE 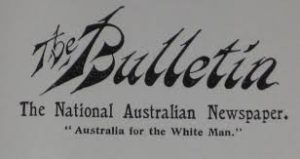 The original Bulletin, which was published in 1880, is the spiritual basis of our New Australian Bulletin. This is an “Australian” nationalist website in the purest sense so what better than to borrow from the legacy of the original White man’s paper. We feel it apt to go back to that place and time since so much that has masqueraded as nationalism is simply agin the tenets, history, politics and literary traditions of those days of hope when it looked like we might indeed forge a White working man’s paradise from the sunburnt Australian soil. Indeed, one need only visit the trove of its archived periodicals of the time to establish a clear definition of what properly constitutes Australian nationalism. This is a familiar quote from an 1887 edition of The Bulletin that sums up that distinction from the cumulous that identifies as ‘White nationalism’ — a concept that seems ignorant to its own globalist reality; in that it tends to overlook the uniqueness and individuality of the race’s members in favour of a generic “European” identity that chauvinistically disregards Australianness.

“By the term Australian we mean not those who have been merely born in Australia. All White men who come to these shores — with a clean record — and who leave behind them the memory of the class distinctions and the religious differences of the old world … all men who leave the tyrant-ridden lands of Europe for freedom of speech and right of personal liberty are Australians before they set foot on the ship which brings them hither. Those who leave their fatherland because they cannot swallow the worm-eaten lie of the divine right of kings to murder peasants are Australian by instinct — Australian and Republican are synonymous.”

In fact, as you can see, it wasn’t a matter of the Australian man ruminating on his European origins but the European man coveting the horizon of his new beginnings away from those heritages. Here, in the newness of the colony, where the men native to the new land were freeing themselves from the yoke of their Imperialist masters, the European man could shake off the shackles of the old world — the prejudices of the class order which determined his station in life from cradle to grave — and seek independence of mind, body and spirit. This was the mission of The Bulletin at the time, as it first gave voice to the “bush poets”, such as Henry Lawson and Banjo Patterson, and sought to establish a native literary tradition, as envisioned by those such as Percy “inky” Stephensen; a veritable icon of the Australian nationalist movement.  However, the essential character of this nationalism has been misunderstood and misrepresented and today those who the media brands “nationalist” and who themselves identify as “nationalist” are nothing of the sort. They confuse ‘patriotism’ with ‘nationalism’ while retaining an Anglophile mindset. Indeed, The Bulletin was so clearly chastising the Royalist of old when in the 1887 editorial reprinted on our home page was written:

“Their lips phrase Australian sentiment, and the faces are bronzed by the Australian sun. But their votes have been purchased by a foreign power. Strip from their alleged Australian figures the tinsel trappings filched from the Royal old-clothes shops of England. Tear from their forms the meretricious finery they have purchased with lip-loyalty and royal toe-beslobberment. What do you see? These men are no Australians! They are the hired Imperial slave-gangers of Downing-street. Their bodies are covered with tattoo marks, V.R., flanking a coronet.”

Today, the majority of what is mistaken as ‘nationalist’, and those who’ve striven to wrest that title to attribute to it contrary meanings that serve others, is the embodiment of who The Bulletin took aim at in that editorial. They are alive and well and, like the “conservative” pastoralists of The Bulletin’s day who aped the English monied classes in their servility to the Crown, they dedicate meanings abhorrent to The Bulletin’s memory. The patriot of today is often referred to as a “civic patriot”, and whatever contradictions may be construed from a literal reading of that title what it means in the contemporary political parlance is a conservative with anti-Islamic opinions who still prefer Australia as a client state to a major power like the United States. He or she is often a “Christian Zionist”, a dreadful misnomer, who believes that since Israel is seemingly such a staunch opponent of Islam that Australia and Israel share a common purpose. This is filtered through an atavistic lens of post-Imperialist hocky which accepts multiracialism (minus Islam) and attends the economic order as if the economy ranked higher in importance than the people it’s meant to serve. They have learned nothing of the importance of racial preservation and the male type of civic patriot often cultivates sexual relations with Asian females who it sees as a natural mate. Thus, the essential nucleus of nationalism is perverted, and not just in this carnal fashion.

It is not okay to utter the words that “as long as ‘they’ assimilate they can continue to come here” since ‘they’ are the problem. But the civic patriot does not come into being on his own, he is guided along by the nefarious constituents of the conservatives themselves. The Liberal Party has done more to subvert Australian nationalism than anyone on the so-called left side of the spectrum. This is not a paranoid fantasy either as many before have tried to dismiss it. Over the past few years, nationalists have exposed the money trail that connects the civic groups to the Liberal Party and their proxies and puppets who infiltrate “the movement” in order to bend it to the will of the Liberals. They create satellites out of these groups and feed them so long as they are useful then cut them loose without ceremony. Pauline Hanson, the mother of all civic patriots, remains confounded by this. Here is a woman who the Libs courtesy of Tony Abbott and his “Australians for honest politics” slush-fund had unjustly imprisoned still willing to preference and support the Liberals oblivious to how much they despise her. Here is Fraser Anning, who was duped from the moment he gulped air in the Senate, who despite all warnings allowed himself to be surrounded by infiltrators who steered him into unnavigable tides. These infiltrators have long been identified by nationalists.

The ghastliness of the Liberal party is that it will pander to those blinded by the colours of the Australian flag, garnering their support, while brokering deals with evil communist China that is already in the process of seizing this country in its “silk road” of world acquisitions. The mentality of the pastoralist of old and the neo-conservatives of today have shown no identifiable separation. They will trade Australian sovereignty for personal gain and shamelessly too! Oligarchs like Gina Rinehart would happily trade off Australia’s north to foreign interests to grow her private wealth even more absurdly. Therefore, you can see, just from the Australian nationalist’s disdain of the treachery of the monied classes just how he finds himself perennially attacked by the forces of neo-conservatism afraid of what it regards as a socialistic bent. This is, in fact, the tradition of the old Australian Labour movement which sought collective bargaining and to nationalise state assets for the good of all White men. It is mistaken to believe, however, that such collectivism would eradicate individual property and wealth, such as the Reds aimed to, but rather share all national wealth among all Australians to maintain general well-being. Whether or not this proviso has any resonance for an avowed capitalist is of no interest to us but it’s a good bet that it wouldn’t sway them an iota in their fear and loathing of us.  Accordingly, we come to our promise to our readers that we are “100% neo-con free” and virulently anti-conservative. So much has been done to demoralise true nationalism for the benefit of the Liberals and others who’ve crawled in thanks to the advent of the “Alt-Right” phenomenon. Social media has played a major role in this subordination and as such you will find that this site operates entirely independently and will not crossover to egregious platforms like Facebook, 4chan, 8chan or Twitter. Those platforms have done too much to harm our cause and allowed in too many infiltrators, agents, and wannabe demagogues who believe that nationalism requires a universal “Hitler”. This is a grave misunderstanding of Australian nationalism, which is not a haven for the narcissist who may be off on a Fuhrer fantasy. It also limits our enemies’ attempts. We are, now, in a post-Facebook era.

One thought on “OUR MISSION STATEMENT: WELCOME TO THE NEW AUSTRALIAN BULLETIN”